"...No longer knowing whether time existed, whether this looking had lasted a second or a hundred years, no longer knowing whether there was a Siddhartha, whether a Gautama, whether a Self, an I and You, wounded in his innermost core as if by a divine arrow whose wound tastes sweet, entranced and bewildered in his innermost core, Govinda remained standing there a short while longer, bending over Siddhartha’s still face that he had just kissed, that had just been the site of all shapes, all Becoming, all Being. This countenance appeared unchanged once the depths of the thousandfold immensity had closed again beneath its surface; he was silently smiling, smiling quietly and gently, very kindly perhaps, perhaps mockingly, precisely as he had smiled, the Sublime One.

Deeply Govinda bowed, tears of which he knew nothing coursed down his old face, and like a fire the feeling of the most ardent love, the most humble reverence was burning in his heart. Deeply he bowed, bowed to the very earth, before the one sitting there motionless, whose smile reminded him of everything he had ever loved in all his life, everything that had ever, in all his life, been dear to him and holy."

'Perhaps one or two. Once one crosses 60, people write a book on Dnyaneshwari. Not on Buddha'...)

'Center of all centers, core of cores,
almond self-enclosed and growing sweet—
all this universe, to the furthest stars
and beyond them, is your flesh, your fruit.
Now you feel how nothing clings to you;
your vast shell reaches into endless space,
and there the rich, thick fluids rise and flow.
Illuminated in your infinite peace,
a billion stars go spinning through the night,
blazing high above your head.
But in you is the presence that
will be, when all the stars are dead.'

(from 'The Selected Poetry of Rainer Maria Rilke' by Stephen Mitchell, 1980/1989)
We were raised at Miraj  (मिरज), for more than twenty years,  looking at the following picture that prominently hung in our drawing room, along with that of Dnyaneshwar (ज्ञानेश्वर).

Every time I looked at that picture, it moved me. Apart from its ethereal beauty, it was personal.

In those years, our own father, for most years,  worked away from Miraj- Bhwandi (भिवंडी), Karmala (करमाळा), Nashik (नाशिक). So his home coming, for most years, was like a festival for us. And his departure a kind of death.

In early years, I used to wonder why Buddha was shown so much bigger than his family.

Now, perhaps I know...it had to be..."your vast shell reaches into endless space".... 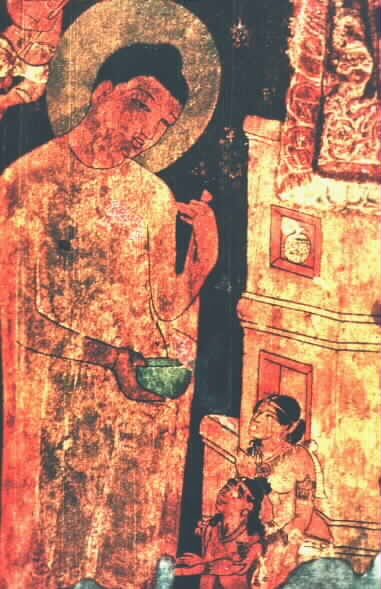 Location: Ajanta
Posted by Aniruddha G. Kulkarni at 9:00 AM No comments: