Jayant Narlikar writes a sceptical essay. Sort of. In English.

There I asked "Will Jayant Narlikar One Day Write Marathi Sceptical Essays?".

We know Fred Hoyle, Narlikar's Guru, who coined the phrase "Big Bang", was himself its most high profile critic.

Now, Narlikar too has attacked it in such a spirited manner that I was startled by its vigour.

Sample some of it:

"...Today, objectivity is under threat because of huge funds that frontier level science requires to test its theories. A classic example is the Big Bang theory which states that the universe originated in a big explosion.

This theory is currently believed and a lot of money is being spent in research furthering this doctrine. The original version of the theory proposed that after its explosive creation, the expansion of the universe slows down because of its own gravitational attraction. It also predicted how its present rate of expansion is related to its present density of matter. However, observations showed that the expansion is accelerating instead of slowing down, that the density of matter it needs to have is several times the density of matter actually observed, and this extra unseen (dark) matter cannot be the “normal” form of matter that we see around us. With these major discrepancies, the model should have been abandoned.

Instead, it is argued that there is a dark energy that repels rather than attracts and that the universe is predominantly made of some abnormal form of matter the likes of which has not been found in the terrestrial laboratory or in the cosmos. There is no independent evidence for these beliefs and their sole objective is to keep the Big Bang model alive..."

This is a very serious charge: Sole objective of dark energy/ matter is to keep the Big Bang model alive.

DENNIS OVERBYE wrote on June 3 2008 in NYT: "...A decade ago, astronomers discovered that what is true for your car keys is not true for the galaxies. Having been impelled apart by the force of the Big Bang, the galaxies, in defiance of cosmic gravity, are picking up speed on a dash toward eternity. If they were keys, they would be shooting for the ceiling.

“That is how shocking this was,” Dr. Livio said.

It is still shocking. Although cosmologists have adopted a cute name, dark energy, for whatever is driving this apparently antigravitational behavior on the part of the universe, nobody claims to understand why it is happening, or its implications for the future of the universe and of the life within it, despite thousands of learned papers, scores of conferences and millions of dollars’ worth of telescope time. It has led some cosmologists to the verge of abandoning their fondest dream: a theory that can account for the universe and everything about it in a single breath.

“The discovery of dark energy has greatly changed how we think about the laws of nature,” said Edward Witten, a theorist at the Institute for Advanced Study in Princeton, N.J..."

Dark Energey and Dark Matter also are two of the most Popular Topics on the website of Scientific American.

Narlikar's claim might put off a prospective young Physics researcher. She may think that the entire discipline is a kind of 'pseudo-science'.

She would be further put off reading Alexander Waugh's recent attack on Stephen Hawking's latest book in The Spectator:

"If Hawking were really serious about answering the ‘ultimate questions of life’ he should have realised long ago that mathematics and geometry are not the right tools for the task....Stephen Hawking has written a short, occasionally facetious, but generally reliable and informative history of classical and quantum mechanics. That is all. That he has adverted to it as an answer to the ultimate question of life is both annoying and inaccurate, but no doubt commercially sensible. Richard Feynman, the American physicist on whose work Hawking bases much of his own theory, wrote: ‘I think I can safely say that nobody understands quantum mechanics.’ Nothing has changed since Feynman’s death in 1988, and although Hawking may have a far deeper knowledge of quantum mechanics than anyone else on this planet, he still doesn’t understand it. With a little less chutzpah he might also have realised that things of which we cannot see the bottom are not necessarily profound."

However, I welcome the scepticism in Narlikar's essay because I feel it will likely lead us to more truthful science. 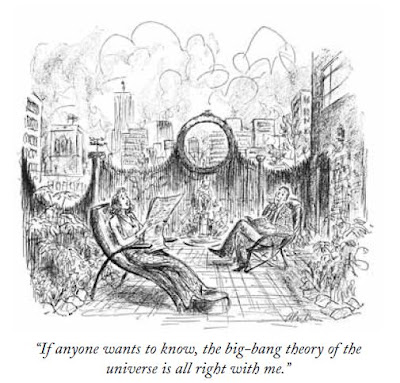 Madam, It is NOT all right with our Dr. Jayant Narlikar.
Posted by Aniruddha G. Kulkarni at 9:00 AM No comments: