It’s because we no longer have literature

In my childhood, before the age of TV, feud was the second most effective crowd puller. First of course was a death in the neighbourhood. Third was a road accident and so on.

Literary feuds can get very exicitng if participants are sufficiently bitchy. In Marathi world, there have been many such feuds.

For instnace- Khandekar Vs. Phadke “Is art only for the sake of art?”. P K Atre Vs. many. B S Mardhekar Vs. G D Madgulkar, P L Deshpande (with a sideshow Govind Talwalkar) Vs. Durga Bhagwat दुर्गा भागवत, Jaywant Dalvi Vs. many and so on.

My father’s first book – “Dhoka, Hamrasta Pudhe Ahe” was savaged by many as obscene but literary critic D K Bedekar defended it, creating quite a spectacle for onlookers. (btw- My father got so scared by fracas, he has never wrtten another controversial book since.) 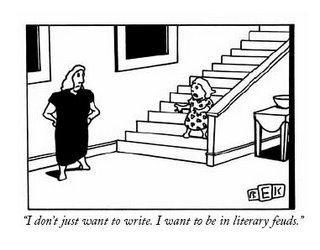