Greek tragedy does not allow any comic relief. Or does it? Trojan Horse

Wikipedia: Greek tragedy does not allow any comic relief.

Matthew Lynn for History Today, August 2011:
1929 the Harvard economist Charles Bullock published a magnificent essay on a monetary experiment conducted by Dionysius the Elder, ruler of the Greek city state of Syracuse from 407 BC until his death in 367. After running up vast debts to pay for his military campaigns, his lavish court and spectacles for the common people he found himself painfully short of ready cash. No one wanted to lend him any more money and taxes were drying up. So Dionysius came up with a great wheeze. On pain of death he forced his citizens to hand in all their cash. Once all the drachmas were collected he simply re-stamped each one drachma coin as two drachmas. Simple. Problem solved. Syracuse was rich again.

This sounds a lot like India's own Muhammad bin Tughluq who too experimented with coinage. But in Tughluq's case it's said that the schemes introduced by him, unlike Dionysius the Elder, were very good but were poorly executed.

"In 2009, my son and I were watching Travel and Living channel.

It was a Samantha Brown hosted program where she had taken us to a Greek coastal town.

It all looked great until she mentioned hotel tariffs in Euros €.

It was an ugly figure when converted into INR.

My son and I immediately looked at each other and started laughing. The reason being who would go to that 'stupid' place when one could go to Goa or any number of Indian beaches, in winter, for fraction of that cost..."

More than a year later, Greece seems to have sunk even further in trouble.

Now for someone as shallow as me, Greece always invokes image of Troy which is best known for being the focus of the Trojan War.

And the Trojan War brings up the tale of Trojan Horse and then it becomes funny...

Watch "Tales from the Public Domain", the fourteenth episode of The Simpsons' thirteenth season.

In its first segment, Homer is Odysseus, and delivers the King of Troy (Ned Flanders) a Trojan horse. He and his crew, including Apu, Lenny, Moe, Professor Frink and Carl, kill all of Troy's citizens and win.

Moe, as he descends from the Trojan horse, looking at the sleeping soldiers of Troy, says: Ohhh...look at them...sleeping like angels (and then he orders)...spare none! 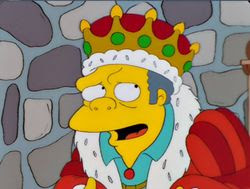 Moe as Claudius in Hamlet from the same episode

I must have seen tens of cartoons on the subject of Trojan Horse. Even the recent The New Yorker has one by Christopher Weyant- Looking at Trojan Horse just outside the gate, one Troy soldier says to the other: "How do we know it's not full of consultants?"

But none of them comes close to the one, see below, by master Richard Decker- Troy soldiers look so relaxed because it's an elephant and not a horse. They have been warned about horse. Elephant sure is harmless! 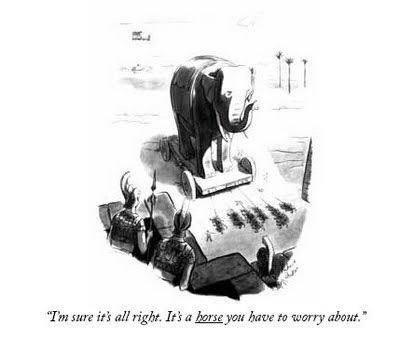 Look at RGJ's picture of June 2011. The anxiety on the faces of Troy soldiers clearly shows because what if it contains Greek debt. 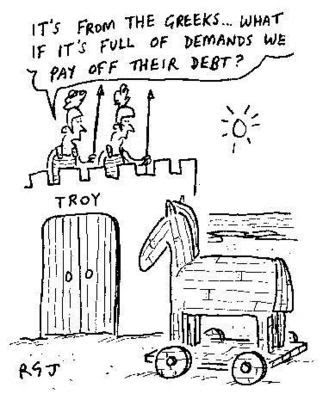 Trojan horse always reminds me of wooden play horse we rode as kids. We had our customary pictures taken on it.

I think it was fun but not all that great one.

Had we known the Greek story then, it would have made our horse more exciting. Soldiers emerging from its saddle- because it was often torn (showing stuffed hay inside)- while we slept, causing mayhem? Ultimate fantasy of a then middle-class boy!

There are several versions of the myth of the Trojan Horse, but the heart of the story is clear enough - the folly of the leaders of Troy in allowing an enormous wooden horse into the city, when everything pointed to the fact it was a stratagem devised by their enemies.

Seemingly a trophy signifying the end of the war in which Troy had been besieged for 10 years, the horse was left outside the city by the Greeks. Troy's leaders had heard and rejected many warnings against bringing the horse within their walls.

More than anything else, they wanted to believe the 10-year siege of the city was over. So they disregarded the warnings and brought the horse within the walls. The soldiers hidden inside stole out at night and opened the city gates to the Greek forces. As we all know, Troy was reduced to ruins.

The Trojans wanted to believe the siege of their city was over. Having held out for so long, they could not bear the thought that their decade-long struggle had been for nothing.
Today we are no different. We humans will do anything to secure a meaning in our lives. We hold on to the projects that have given our lives shape, even at the cost of losing all we care for.
Confronted with intractable difficulties, the most sensible thing to do may be to toss the past aside and improvise. But this involves casting off our beliefs, and we would rather be ruined than face facts. That is the perverse persistence we call folly, and nothing is more human. (19 August 2011)
Posted by Aniruddha G. Kulkarni at 9:00 AM No comments: Links to this post