Germans may not have been aware of every aspect of Hitler’s plan to exterminate the Jews and eliminate political dissenters, but they had an acute understanding of the diabolical nature of his vision, and instead of acting against it they sometimes laughed about it.

I often feel that activists (and international celebrities) like Arundhati Roy are lucky when it comes to freedom of expression in India because the Indian state makes sure that they are not touched by anyone. They also are financially secure if not wealthy by Indian standards.

But when it comes to common man, he has to constantly look over his shoulder to write or say something that may ruffle feathers of fundamentalists of all hue in Maharashtra. 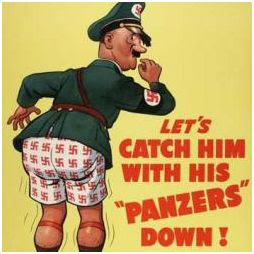 "BEIRUT, Lebanon — Masked gunmen severely beat Syria’s best-known political cartoonist on Thursday, breaking his hand and leaving him to bleed on the side of a road in Damascus, activists said.

The attack came days after the artist, Ali Farzat, published a cartoon showing President Bashar al-Assad hitching a ride out of town with Col. Muammar el-Qaddafi of Libya, who was toppled from power this week..." (August 26, 2011)

The Guardian had rightly asked in July 2002:

"Favoured by Syria's new president (President Bashar al-Assad), Ali Farzat, leading cartoonist and popular newspaper publisher, seemed to have a licence to mock. Can it last?"

In India, many political and social activists have been attacked or even killed but luckily for cartoonists they seem to have been spared so far. Also, as said earlier, cartoonists too play safe.

I had not seen the work of Mr. Farzat. I saw it on Guardian's website.

The pictures are absolutely wonderful. Even those which I don't fully understand.

See one of them below.

On tele, 'Mushy Love in the time of Torture'? Look at the right foot and the right hand of the captive. They lie severed on the ground!

Absolutely gut-wrenching. Brings home the power of the cartoon as a medium. 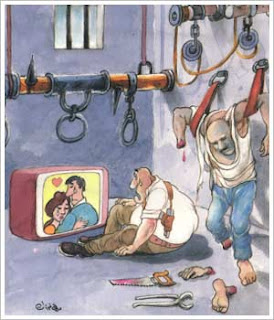 From 'Dead Funny: Humor in Hitler’s Germany' by Rudolph Herzog:

The Gestapo is about to shoot some Jews when the commanding officer walks up to one of them and growls, “You almost look Aryan, so I’ll give you a chance. I wear a glass eye, but it’s not easy to tell. If you can guess which eye it is, I’ll let you go.” Immediately, the Jew answered, “The left one!” “How did you know?” asks the Gestapo commander. “It looks so human.”

The Holocaust is a tale, among other things, of the most staggering breakdowns of ethical responsibility. Neighbors turned on neighbors, and people closed their eyes to atrocities committed on a daily basis—evil was everyday and commonplace, an idea that is critical to Herzog’s premise, which is that the jokes told in Nazi Germany by ordinary citizens reveal the extent to which they were also responsible for the terrors committed by Nazis on behalf of the state. Herzog is accurate in his assessment that when we laugh at Hitler, we “dismiss the metaphysical, demonic capabilities accorded to him by postwar apologists” and others who would have us believe that Hitler’s capacity for evil was not human. Laughing at Hitler might have been a way back to ethical responsibility, because inherent in the laugh is an acknowledgment of just how frightening the human capacity for evil can be.
Posted by Aniruddha G. Kulkarni at 9:00 AM No comments: