We’re in Luck. Here’s one Who Loves India and Speaks Hindustani.

Acquiring and dishing out perspective on an alien country is extremely difficult and time consuming. Many Chinese, Arabs and Europeans did it before the dawn of 20th century but since then it hasn’t been easy.

This blog has already expressed gratitude towards masters like Paul Theroux, J K Galbraith, William Dalrymple and to large extent V S Naipaul for their perspective on India and Indians.

Today I wish to add Phillips Talbot to the list. A G Noorani, golden hand at Frontline, has introduced him to me and my world is much richer for this.

“…There was nothing inevitable about Partition. On January 10, 1940, Talbot wrote: “The Muslim League and the Congress are pulling in opposite directions, leaving the British to keep the peace. And the League’s solution for the impasse? To carve India up into a Hindu country and a Muslim country, or at least into two federations within the gossamer net of a confederation. The trouble is that the Muslims themselves – to say nothing of other interests – haven’t yet agreed on any scheme which makes partition practical.” Jinnah’s letter to the London weekly Time and Tide (January 19, 1940) spoke of “two nations who both must share the governance of their common motherland” so that “India may take its place amongst the great nations of the world” (emphasis added throughout.) That implies not partition but power-sharing in a united India which, despite his two-nation theory, he wished to rank among the “great nations of the world”…

Communal elements in the Congress needed no help from the League. Nehru noted in his Autobiography in 1936 that “many a Congressman was a communalist under his nationalist garb” (page 136). That included men who came to wield power at the Centre and in the States. Patel, Pant, Sampurnanand and Tandon, Ravi Shankar Shukla, B.C. Roy and Morarji Desai besides others. Rajaji provided a sterling exception until his death.

India is undergoing a Hinduistic resurgence. A political generation dominated by the Pakistan issue has stimulated what I suppose may be the most vigorous wave of sheer Hinduism since Buddhism was ejected from India. To take one small example: despite high-level statements of impartiality, the United Provinces has adopted Hindi, the Sanskrit derivative closely associated with Hinduism, as its official language instead of the mixed Hindustani of Sanskritic-Persian origins which Muslims prefer and which Gandhi recommended. Muslims in various Indian provinces are drastically on the defensive; many Hindus act as if they had entered the promised land. (An equal but opposite condition exists in Pakistan.) Politically the Congress remains the dominant organisation in India, and one-party rule seems indicated so long as the present veteran leadership keeps its grip. The Congress retains some of its old conglomerate character, but Hinduistic and bloated financial interests are extremely influential despite Nehru’s resistance.

One of the most dangerous features of continued controversy between India and Pakistan is the prospect that communal organisations of fascist character may thrive on the disputes .

Corruption in public life is gross. Large-scale bribery and refusal to pay income tax are phenomena of the final war years of the British period when contracts and the operation of various controls involved millions of rupees. This is an economic factor that the new government has inherited. Important members of the Congress as well as businessmen are involved.

Generally speaking, Indians’ nerves are raw. Every issue tends to produce a crisis. An oversensitive nationalistic spirit is visible. Public irresponsibility surges ahead of government action. Again, a similar condition exists in Pakistan. Neither Dominion government, therefore, is able to guarantee implementation of its promises to the other.

To think of India as a starving, bankrupt, primitive and uncivilised country seems to me to be as narrow as to speak of America as a country only of ironclad Darktowns, Lower East Side New Yorks, and Near West Side Chicagos. The other side of the medal is that India is living up to her brilliant intellectual heritage. She has been called the mother of philosophy, and the debt of her children in other lands has been put by Max Muller in words marked more by fervour than moderation. But the important point today is that the attainment of a world point of view is a serious subject of thought and discussion in India among circles whose counterparts in America ordinarily quibble over the relative merits of Cubs and Giants. Economists working with or separately from British economists have developed an approach to national problems which is sound, progressive and forward-looking. Literature in Bengali, Urdu and other languages includes modern works that authorities who judge by world standards call significant; certainly Tagore and Iqbal could hardly be called provincial figures. In science too the country is holding up her head, pointing among her sons to three Nobel Prize winners and to a challenge to Einsteinism, which I do not pretend to understand, that has been accepted by academies of at least three countries. India has contributed professors to Oxford and American universities, editors to London publishers, religious leaders to the world. But those are her bright individuals. Among the less select circle of ordinary educated people there is breadth of culture that is sometimes missed by outsiders because it is not all in English. Few in our country know Greek and Aramaic as some of these people know Arabic and others Sanskrit. Few can recite Latin poetry with the delight that these people find in Persian couplets and the Ramayana. But even more general than that, the conversational level among educated Indians is high. Their interests are broad and their tongues usually adept at expression. They are cultured.”

This last point is after my heart: “breadth of culture that is sometimes missed by outsiders because it is not all in English”. It’s missed even by the insiders these days because they are not paying enough attention to the knowledge available in native languages of India.

My placard in the picture below would read- Yankee, Come Back soon! 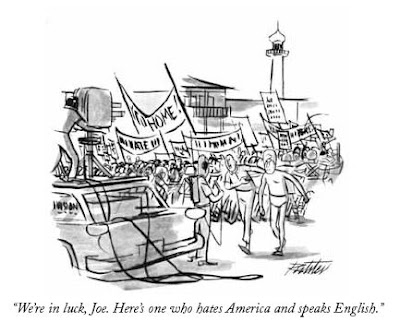 Artist: Mischa Richter The New Yorker 13 Aug 1960
Posted by Aniruddha G. Kulkarni at 12:52 PM No comments: Links to this post