G G Agarkar knew whether there was Hell or not 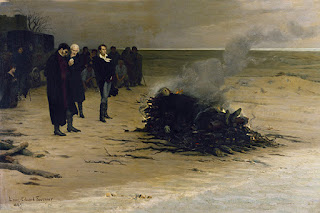 "Shelley the Atheist is dead. Now he knows whether there is Hell or not."

(from 'The best poems of the English language/ from Chaucer through Frost' Selected with commentary by Harold Bloom, 2004)

For whence did Dante take the materials of his hell but from our actual world And yet he made a very proper hell out of it. But when, on the other hand, he came to describe heaven and its delights, he had an insurmountable difficulty before him, for our world affords no materials at all for this. . . ,

“If I had been a judge I would not sentence Kasab to death for a different reason. It is only by remaining in the hell of an Indian jail that he would realise that what the Mullahs told him is false.
Long stay in an Indian prison will detoxify him of all the superstitions and illusions instilled into him.”

"Progress is not an illusion, it happens, but it is slow and invariably disappointing. There is always a new tyrant waiting to take over from the old — generally not quite so bad, but still a tyrant. Consequently two viewpoints are always tenable. The one, how can you improve human nature until you have changed the system? The other, what is the use of changing the system before you have improved human nature? They appeal to different individuals, and they probably show a tendency to alternate in point of time. The moralist and the revolutionary are constantly undermining one another."

Gopalrao's life- as sensitively documented by Y D Phadke (य दि फडके) in his 'Agarkar', 1996 (आगरकर)- of just 39 years, reads many times, like the lives of his favourite Shakespeare's tragic heroes.

(Although I love Phadke's book, like all his books, it leaves me hungry for more because the benchmark for a good biography is now quite high.

For instance, I want to know more about the books that shaped Agarkar's world view. He was such an Eklavya-like disciple of John Stuart Mill, son of a Scotsman, that even in his next birth he wanted to be Mill's student and sit at his feet to learn! But did he read two other great Scotsmen- Adam Smith, David Hume and others like Charles Darwin, Michel de Montaigne, Arthur Schopenhauer, Karl Marx, Charles Dickens, Friedrich Nietzsche?

[p.s.- John Gray informs on Sept 21 20011: "The Origin of Species (of Darwin) appeared in the same year as John Stuart Mill’s On Liberty (1859), but the most influential liberal humanist (who died in 1873) never mentioned Darwin in his seminal works." If he had, Agarkar would have surely read Darwin!]

Agarkar rated The Bard ahead of Bhavabhuti (भवभूति) and Kālidāsa. He translated Hamlet into Marathi- 'Vikarvilasit' (विकारविलसित). Although the translation has never been rated highly, it is significant that it was one of the first translations of the Bard into Marathi and that Agarkar, a secular humanist, was attracted to 'Hamlet'.

(Appreciate how a nationalist opposing the British had no hesitation openly embracing a British artist ahead of the two of India's best. )

However, I feel he was more like a Cultural Hindu, the way Richard Dawkins describes himself as Cultural Christian. (Cultural Christian is a broad term used to describe people with either ethnic or religious Christian heritage who may not believe in the religious claims of Christianity, but who retain an affinity for the culture, art, music, and so on related to it.)

Agarkar did not 'waste' time reading the Puranas and other religious books but enjoyed attending a performance of Kirtan (कीर्तन).

A Kirtan artist Narayanbua Ghamande (नारायणबुवा घमंडे) was well aware of atheism of Agarkar and used to be surprised not just to find him in his audience but concentrating hard on the discourse. Ghamande used to tell his friends: "That Mahar alone was paying attention to the Kirtan" (तो महार तेवढा एकटा लक्ष देऊन कीर्तन ऐकत होता.)

[The term 'Mahar' was used derogatorily by Mr. Ghamande. I wonder if real Mahars (Dalits) were allowed to attend his kirtans because they were then NOT allowed to use municipal water tanks meant for Brahmins.

I also wonder what other attendees of the kirtan used to do. Ogle at women in the audience? My mother's mother used to complain how some men- all Brahmin- used to behave naughtily, even shamelessly, at Kirtans! Watch 'Ghashiram Kotwal' (घाशीराम कोतवाल) for a demo.]

On May 12 1881, there was a get-together of the past and the present students of Deccan college. It was attended by Mahadev Govind Ranade (महादेव गोविंद रानडे), Lokhitwadi (लोकहितवादी) Gopal Hari Deshmukh, Agarkar among others.

In the gathering, there was a public debate on the issues related to religion.

We can guess what Agarkar based this upon: "religion of humanity"-the secular humanist creed imbibed by Mill from the French positivist thinker Auguste Comte, which aimed to replace the traditional faiths of the West with a belief in human progress. (It's interesting to speculate: Had Agarkar lived till 1930's, what would he have thought of the crimes of Nazism and Communism, knowing that a type of atheism was at the core of both of them.)

(I am an absolute sucker for the 19th century Marathi that has been quoted above...its vigour, its strength, its confidence, its brevity, its vocabulary... Read another example of it here. But sometimes it degenerated beyond any civility as described here.)

How prescient Lokhitwadi has turned out to be!

In year 2011, in India, religion is going as strong as ever. Maybe noisier, and perhaps less tolerant.

Even in the West, as John Gray says: "Everyone believed the world was becoming steadily more secular. Yet on 11 September war and religion were as deeply intertwined as ever they had been in human history. The terrorists were foot soldiers in a new war of religion." 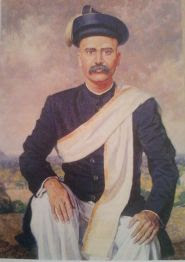 Now this is a beautiful portrait of Agarkar.

But did Agarkar look like this? Does the picture reflect Agarkar's Shakespearean-Tragic-Hero qualities?

I am not sure. Some of the descriptions of Agarkar's looks are not very kind. The late Mr. Deuskar never saw him.

G G Agarkar knew that there was Hell because he experienced it right here on the earth.

No, I am not talking about his ugly feuds with B G Tilak.

It was located in Dongri (डोंगरी) prison in South Mumbai where he was jailed for 101 days in 1882. He wasn't a political prisoner, a la Jawaharlal Nehru's imprisonment in 1942-1946 at Ahmednagar, and also wasn't treated anything like 2G and Commonwealth-Games-2010 scamsters in 2011.

He, B G Tilak (बाळ गंगाधर टिळक) and two others shared a cell of 13 sq ft! (Is '13' a typo in Phadke's book? According to Wikipedia modern subway standards specify 3 square feet for rush-hour standees. So four of them took 12 sq ft standing!) They were each given an iron pot for excretion. They had to stay in the cell from 5:30 PM to 6:30 AM each day along with their pots. A single flat stone was a common bed.

Agarkar used to often get runny nose and didn't have even a good hanky to wipe mucus. Food was unpalatable, more so because Tilak-Agarkar didn't eat onion and garlic. For first 25 days, they were denied any access to books and writing material.

Most of us, if not prison, are familiar with other forms of hell.

‘I never expected hell to be as bad as this.’

Artist: (I am guessing) Paul Wood Courtesy: The Spectator
Posted by Aniruddha G. Kulkarni at 9:00 AM 5 comments: Links to this post