i for Imaginary Numbers and Ishavasya-Vritti

"Archimedes will be remembered when Aeschylus is forgotten, because languages die and mathematical ideas do not. "Immortality" may be a silly word, but probably a mathematician has the best chance of whatever it may mean."

"...Mathematics, in which physicists vest unwarranted confidence, is far too blunt a tool. It worked for Newton, Maxwell and Einstein because they found equations that accurately described the classical world. But with the discovery, in the early 20th century, of quantum mechanics, everything changed. Subatomic particles do not behave like large visible objects. One cannot measure a particle’s position and its velocity at the same time; the arrow of time cannot be observed in particle interactions; and (so Hawking believes) for a particle to travel between two points it has to take every ‘possible path’ between them simultaneously. The number of possible paths from A to B is, he claims, infinite. If this is correct, then it becomes a feature of the quantum world that all history, and all possible histories, also take place simultaneously.

How can mathematics, however sophisticated, be up to the task of dealing with this? Numbers, after all, were created by humans to describe things in the observed world. They are adjectival. How can one ascribe a number to a particle, or to its position, or its velocity if, while travelling from A to B, it is said to be in an infinite number of places simultaneously?..."

"Grigori Perelman, arguably the world's greatest mathematician, worked out a solution to one of the seven great unsolved mathematical problems, the Poincaré conjecture, in 2002. It was a magnificent achievement. Honours, cash, offers of world lecture tours and lucrative teaching posts were hurled at the Russian theorist. But Perelman turned down the lot, including the Fields medal, the mathematical world's equivalent of a Nobel prize, and a million dollars in prize money that the Clay Institute wanted to give him for his work. Since then, he has announced he has given up the study of mathematics altogether and has cut off communications with all journalists and nearly all his friends."

"One misses the celebration of science today. Science acquired its creativity through play and it is the playfulness of science that created a Jagadish Chandra Bose, a Raman, a Ramanujan or Chandrasekhar. Science as playfulness has to come back as cultural form to childhood and the universities. Science has to be enjoyable...

...Try an experiment. Make a list of our top scientists and read their speeches. Pick the best and you will see that our scientists have little understanding of the nature of science. Just try it with a sample of speeches from the Indian Science Congress. The illiteracy of our scientists and our politicians about science seems to be co-produced." (The Asian Age, Jan 12 2012)

India's Prime Minister Manmohan Singh declared 2012 as the 'National Mathematical year' as a tribute to Srinivasa Ramanujan. He also voiced concern over the "badly inadequate" number of competent mathematicians in the country.

("The class that has got a Bṛhaspati (guru of the gods) like Bhāskarāchārya, also has a boy who ranks second. But it incorrect that they be rated numer one and two students...")

I quote this because I find it very interesting how a historian like Shejwalkar invokes a mathematician like Bhāskarāchārya while comparing Nanasaheb Peshwa (1721-1761) (नानासाहेब पेशवा)- student claiming to be second in an imaginary class- to Shivaji (1630-1680) (शिवाजी) who is first.

Mathematics always brings to my mind one of the best books I have ever read: Simon Singh's 'Fermat's Last Theorem' (1997).

The author says in the preface:

"The story of Fermat’s Last Theorem is inextricably linked with the history of mathematics, touching on all the major themes of number theory. It provides a unique insight into what drives mathematics and, perhaps more important, what inspires mathematicians. The Last Theorem is at the heart of an intriguing saga of courage, skullduggery, cunning, and tragedy, involving all the greatest heroes of mathematics.

Ferrmat’s Last Theorem has its origins in the mathematics of ancient Greece, two thousand years before Pierre de Fermat constructed the problem in the form we know it today. Hence, it links the foundations of mathematics created by Pythagoras to the most sophisticated ideas in modern mathematics.”

For me the book becomes classy because it is as much about mathematicians as mathematics.

It quotes German mathematician Gottfried Leibniz on the imaginary number:

"The imaginary number is a fine and wonderful recourse of the divine spirit, almost an amphibian between being and non-being."

I first learnt about imaginary numbers in 1975. I was stunned: so math is not just about real. Although, I soon figured out how to deal with them and it was fun, how does one comprehend this 'imaginary' stuff?

I wish I was told about this quote of Leibniz then...Divine spirit, being and non-being...'saguna'(सगुण), 'nirguna' (निर्गुण), amphibian invoking my favourite frogs...

No wonder Vinoba Bhave (विनोबा भावे) is as much fascinated by imaginary numbers (i.e. mathematics) as 'Ishavasya-Vritti'. (Read a related post here.)

Carl Zimmer has just published a book "Science Ink" which explores the stories of people who have put equations, formulas, or other science-related images permanently on their body.

WSJ has reviewed it here.

In this India's national mathematical year, here is a suggestion: 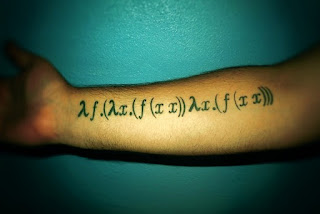 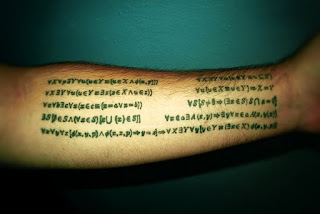 'In the early 1900s, a group of mathematicians turned set theory, first proposed by Georg Cantor in the 1870s, into a series of logical statements from which all of mathematics could be derived. The results include the "Zermelo-Fraenkel with Choice axioms," and inspired this enthusiast to take permanent note of the achievement on both arms. '