"How Mr Modi has outplayed the media: ... From a ruling party's perspective, the BJP is, thus, in a sweet spot; editorial independence in India - and with it, analytical coverage of governance - is rapidly declining. There is little reason to waste one's energies with press conferences; a press handout works so much better..."

"...Journalism in India was once a profession. It has now become a trade. It has no more moral function than the manufacture of soap. It does not regard itself as the responsible adviser of the Public. To give the news uncoloured by any motive, to present a certain view of public policy which it believes to be for the good of the community, to correct and chastise without fear all those, no matter how high, who have chosen a wrong or a barren path, is not regarded by journalism in India its first or foremost duty. To accept a hero and worship him has become its principal duty. Under it, news gives place to sensation, reasoned opinion to unreasoning passion, appeal to the minds of responsible people to appeal to the emotions of the irresponsible. Lord Salisbury spoke of the Northcliffe journalism as written by office-boys for office-boys. Indian journalism is all that plus something more. It is written by drum-boys to glorify their heroes. Never has the interest of country been sacrificed so senselessly for the propagation of hero-worship. Never has hero-worship become so blind as we see it in India today. There are, I am glad to say, honourable exceptions. But they are too few and their voice is never heard. Entrenched behind the plaudits of the Press, the spirit of domination exhibited by these two great men (GANDHI AND JINNAH) has transgressed all limits. By their domination they have demoralised their followers and demoralized politics. By their domination they have made half their followers fools and the other half hypocrites. In establishing their supremacy they have taken the aid of " big business " and money magnates. For the first time in our country money is taking the field as an organized power...":

"...The stenographer normally handled Gandhi’s correspondence and whipped up the transcripts of his nightly talks at prayer meetings for the small retinue of journalists that trailed him. A pioneer in the art of press manipulation, Gandhi insisted the journalists file not on the words that had actually come out of his mouth but on versions he “authorized” after his own sometimes heavy editing of the transcripts. The journalists—like the armed police detachment assigned by Suhrawardy to protect him—were also instructed to keep a decent distance so that the Mahatma’s sense of his solitary mission would not be compromised..."

“…People are amazed or disgusted, or both, at today’s “power of the media.” The punch is in that plural, “media”—the twenty-four-hour flow of intermingled news and opinion not only from print but also from TV channels, radio stations, Twitter, e-mails, and other electronic “feeds.” This storm of information from many sources may make us underestimate the power of the press in the nineteenth century when it had just one medium—the newspaper. That also came at people from many directions—in multiple editions from multiple papers in every big city, from “extras” hawked constantly in the streets, from telegraphed reprints in other papers, from articles put out as pamphlets.

Every bit of that information was blatantly biased in ways that would make today’s Fox News blush. Editors ran their own candidates—in fact they ran for office themselves, and often continued in their post at the paper while holding office. Politicians, knowing this, cultivated their own party’s papers, both the owners and the editors, shared staff with them, released news to them early or exclusively to keep them loyal, rewarded them with state or federal appointments when they won.

It was a dirty game by later standards, and no one played it better than Abraham Lincoln. He developed new stratagems as he rose from citizen to candidate to officeholder. Without abandoning his old methods, he developed new ones, more effective if no more scrupulous, as he got better himself (and better situated), for controlling what was written about him, his policies, and his adversaries…” 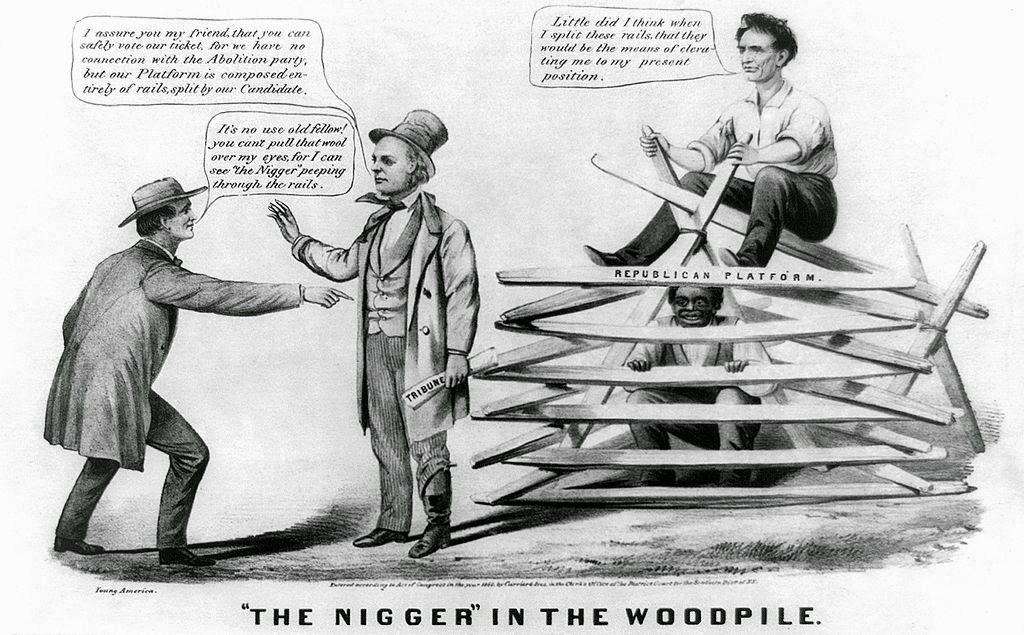 Artist: Louis Maurer, 1860
Now almost 155-year-old, the cartoon- little verbose- is itself very good and, once you understand, very funny.

What is Mr. Lincoln doing in the picture?

He is trying to hide an African-American from a man identified as "Young America"!

Did he need skills in press manipulation to accomplish such acts?