It was interesting to read Jagdish Bhagwati invoking Chaplin's Modern Times in his comments to Financial Times on Jan 3, 2007 titled "Technology, not globalisation, drives wages down".

He says: "Recall how he (Charlie) goes berserk on the assembly line, the mechanical motion of turning the spanner finally getting to him. There are assembly lines today, but they are without workers; they are managed by computers in a glass cage above, with highly skilled engineers in charge.
Such technical change is quickly spreading through the system. This naturally creates, in the short-run, pressure on the jobs and wages of the workers being displaced."

What about alienation? I thought the scene from Modern Times was more about Charlie's alienation than his wages.

What is true of a call center worker in 1936 below is perhaps still valid for a swanky BPO factory in India today. 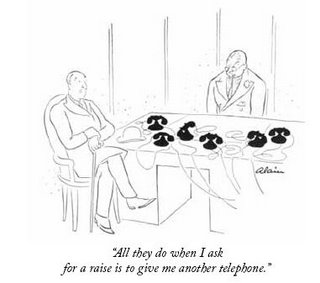