“...Americans increasingly digested their information in numerical form. After 1905, gamblers judged horses by the portents in the Racing Form and baseball fans sized up hitters by the tables in The Sporting News. Newspapers published an avalanche of statistics evaluating business acumen by quarterly earnings, literature by copies sold, and drama by the number of weeks on Broadway. Many observers considered such quantitative reasoning a national trait. 'If the English are a nation of shopkeepers, Americans are a nation of expert accountants', critic and playwright Eugene R. White observed..."

"...When we are busy focused on common organizational goals, like quarterly earnings or sales quotas, the ethical implications of important decisions can fade from our minds. Through this ethical fading, we end up engaging in or condoning behavior that we would condemn if we were consciously aware of it.

The underlying psychology helps explain why ethical lapses in the corporate world seem so pervasive and intractable. It also explains why sanctions, like fines and penalties, can have the perverse effect of increasing the undesirable behaviors they are designed to discourage..."

"...On Wall Street dealing desks, profits and losses are evaluated every afternoon when trading ends, and the firms’ positions are “marked to market”—valued on the basis of the closing prices. A trader can borrow money and place a leveraged bet on a certain market. As long as the market goes up, he will appear to be making a steady profit. But if the market eventually turns against him his capital may be wiped out. “You can create a trading strategy that overnight makes lots of money, and it can take months or years to find out whether it is real money or luck or excessive risk-taking,” Philippon explained. “Sometimes, even then it is hard.” Since traders (and their managers) get evaluated on a quarterly basis, they can be paid handsomely for placing bets that ultimately bankrupt their companies. “In most industries, a good idea is rewarded because the company generates profits and real cash flows,” Philippon said. “In finance, it is often just a trading gain. The closer you get to financial markets the easier it is to book funny profits...."

I have worked in organizations who were obsessed with quarterly performance.

I have already shared  following great cartoon on the subject of being accountants on August 30 2007. 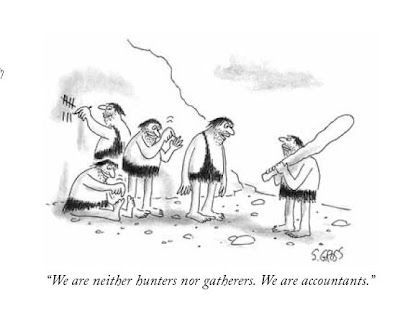 Now, I share another great cartoon I came across in March 2014 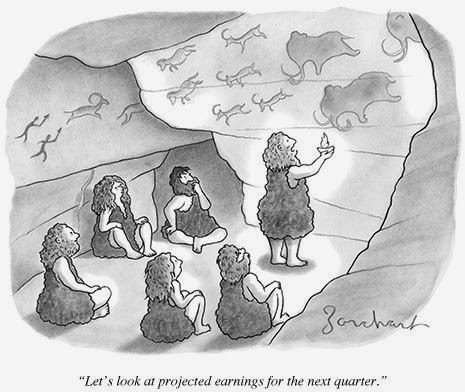 Was man's life as boring as this, even in caves?