Chairman, Press Council of India: I have a poor opinion of most media people

"...India’s recent development experience includes both spectacular success as well as massive failure. The growth record is very impressive, and provides an important basis for all-round development, not least by generating more public revenue (about four times as much today, in real terms, as in 1990). But there has also been a failure to ensure that rapid growth translates into better living conditions for the Indian people. It is not that they have not improved at all, but the pace of improvement has been very slow—even slower than in Bangladesh or Nepal. There is probably no other example in the history of world development of an economy growing so fast for so long with such limited results in terms of broad-based social progress.

There is no mystery in this contrast, or in the limited reach of India’s development efforts. Both reflect the nature of policy priorities in this period. But as we have argued, these priorities can change through democratic engagement—as has already happened to some extent in specific states. However, this requires a radical broadening of public discussion in India to development-related matters—rather than keeping it confined to simple comparisons of the growth of the gnp, and naive admiration (implicit or explicit) of the high living standards of a relatively small part of the population. An exaggerated concentration on the lives of the minority of the better-off, fed strongly by media interest, gives an unreal picture of the rosiness of what is happening to Indians in general, and stifles public dialogue of other issues. Imaginative democratic practice, we have argued, is essential for broadening and enhancing India’s development achievements."

"....journalism may be the greatest plague we face today- as the world becomes more and more complicated and our minds are trained for more and more simplification".

“The dumbing down of America is most evident in the slow decay of substantive content in the enormously influential media, the 30-second sound bites (now down to 10 seconds or less), lowest common denominator programming, credulous presentations on pseudo-science and superstition, but especially a kind of celebration of ignorance. “

"But seriously, most Indian television news is a disgrace. Production is shocking, the viewer is assailed by 'breaking news', and there is almost nothing about the news behind the news. Investigative reporting usually consists of a reporter in the 'field' - the field being a major Indian city - waving a piece of paper around claiming that he has got access to a top secret internal government memorandum. If you look at the eyes of the reporter and the anchor, you cannot help the feeling that neither of them knows very much or cares very much about the issue. Television is largely theatre, and it is theatre they are determined to deliver."

It was great fun reading Press Council of India's chairman Justice Markandey Katju's views on Indian journalists in The Times of India Nov 1 2011.

...Indian media is very often playing an anti-people role. It often diverts the attention of the people from the real problems which are basically economic. 80 per cent people are living in horrible poverty, unemployment, facing price rise, health care (problems).”

I feel sorry for Mr. Katju because he seems to be overlooking a golden rule: this business of journalism is about pure entertainment.

“Most journalists do not take things too seriously. After all, this business of journalism is about pure entertainment, not a search for truth, particularly when it comes to radio and television. The trick is to stay away from those who do not seem to know that they are just entertainers and actually believe that they are thinkers.”

Some hope is implied in Mr. Taleb's statement for newspapers. Like in this quote of Isaac Chotiner: Newspapers have changed considerably in the past two centuries. They currently stand as one of the very few barriers to a media universe that is comprised of almost nothing but outbursts and opinions.

But some of the newspapers I see regularly are nothing but "outbursts and opinions" wrapped in commercial advertisements.

As far as television news: ALESSANDRA STANLEY- "In today’s television news market, that cable network and its stars are like the financiers they cover: media short-sellers trading shamelessly on publicity, good or bad, so long as it drives up ratings. There isn’t enough regulation on Wall Street, and there’s hardly any accountability on cable news: it’s a 24-hour star system in which opinions — and showmanship — matter more than facts."

But what about some of those high profile TV anchors interviewing national and international political/business leaders, sportspersons, writers, film-stars and other celebrities?

Taleb: “The interview is illustrative of the destructive aspect of the media, in catering to our heavily warped common sense and biases… (Interviewer) might even be someone of the utmost intellectual integrity, his profession, however, is merely to sound smart and intelligent to the hordes. ” 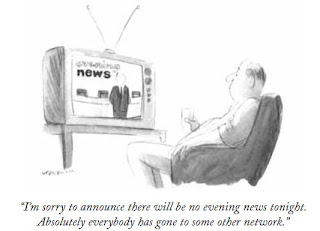 Will we ever get as lucky as the gentleman in the picture above? "No news tonight." If we do, I won't be interested in knowing 'why'.

I agree with diagnosis but disagree with the medicine Mr. Katju has in mind and I quote:

" He also said he had written to the PM demanding that the Press Council be given “more teeth’’. Only last month, Katju had said in another TV interview that he would not shy away from using the “danda” to rein in erring journalists."

'Danda' won't work. It reminds me of 'The Emergency'. People's education may work. In the long run. 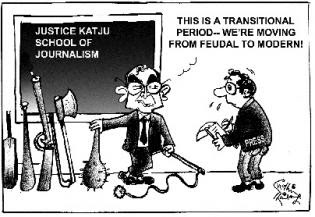 Artist: Sudhir Tailang, The Asian Age, November 2 2011
Posted by Aniruddha G. Kulkarni at 9:00 AM No comments: Links to this post