"O terrible influence of this race
which serves neither god nor king,
given over to the mundane sciences,
to base mechanical professions!
Pernicious breed! What will you not attempt,


left to your own devices,
abandoned without restraint
to that fatal  spirit of knowledge, of invention, of progress."

Stephen Jay Gould, ‘Full House: The Spread of Excellence From Plato to Darwin’, 1996 :


“…Between 1685 (the birth of Bach and Handel) and 1828 (the death of Schubert), the small world of German-speaking people gave us the full life spans of Bach, Handel, Haydn, Mozart, Beethoven, and Schubert, to mention just a few. Where are their counterparts today? Who, in the vastly larger domain of the entire world, with musical training available to so many million more people, would you choose among late-twentieth-century composers to rank with these men?


I can’t believe that a musical virus, now extinct, was then loose in the German-speaking world. Nor can we deny that many more people of equal or greater potential talent must now be alive and active somewhere on this planet. What are they doing? Are they writing in styles so arcane that only a rarefied avant-garde of professionals has any access? Are they performing jazz, or (God help us) rock, or some other genre instead? I do suspect that these people exist, but are victims of the right wall and our unforgiving ethic of  innovation …”

Evgeny Morozov:
"...The sewing machine was the smartphone of the nineteenth century. Just skim through the promotional materials of the leading sewing-machine manufacturers of that distant era and you will notice the many similarities with our own lofty, dizzy discourse. The catalog from Willcox & Gibbs, the Apple of its day, in 1864, includes glowing testimonials from a number of reverends thrilled by the civilizing powers of the new machine..."

I bought  much talked about Clayton M. Christensen's ' The Innovator's Dilemma: When New Technologies Cause Great Firms to Fail', 1997 many years ago.

Like majority of my books, I have still NOT finished reading it.

Lepore has taken apart the book and a lot of management jargon in it and how!

I have always been mildly suspicious of the word 'innovation'. Lepore says all we have done is replaced the word progress with innovation!

"...The idea of progress—the notion that human history is the history of human betterment—dominated the world view of the West between the Enlightenment and the First World War. It had critics from the start, and, in the last century, even people who cherish the idea of progress, and point to improvements like the eradication of contagious diseases and the education of girls, have been hard-pressed to hold on to it while reckoning with two World Wars, the Holocaust and Hiroshima, genocide and global warming. Replacing “progress” with “innovation” skirts the question of whether a novelty is an improvement: the world may not be getting better and better but our devices are getting newer and newer."

Yes, 'the world may not be getting better and better but our devices are getting newer and newer.' 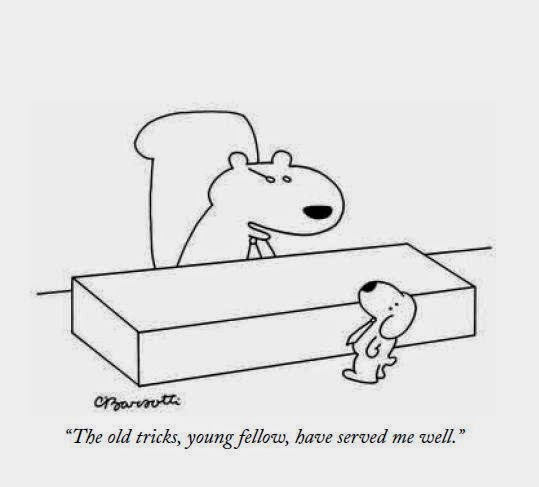