Don’t Anger Gods During This Diwali…

Diwali always brings to my mind these words of Charles Dickens:

"…………a good time: a kind, forgiving, charitable, pleasant time: the only time I know of in the long calendar of the year, when men and women seem by one consent to open their shut-up hearts freely, and to think of other people below them as if they really were fellow-passengers to the grave, and not another race of creatures bound on other journeys" (A Christmas Carol 1843)

Was Mark Twain fair in saying:

"It is a curious people (Indians). With them, all life seems to be sacred except human life." (Following the Equator; a Journey Around the World 1897)?

At Miraj, I remember when mother kept earthen lamps outside the house and in windows, they were stolen, not for decoration but for cooking oil.

It's hard to be indifferent to such poverty.

Rajendra Pachauri has asked us:

Say no to firecrackers
Use diyas and candles
Don’t choke gifts with plastic wraps
Cut down on materialism. Gift a plant
Keep your car parked in the garage. Use the public transport to visit the friends.

The Economist November 3, 2007, our thought-leaders' Reader's Digest, has called India "the world's most religious country". Therefore let us invoke god.

Open your “shut-up hearts freely” and observe green ways during the festival otherwise gods will be angry! 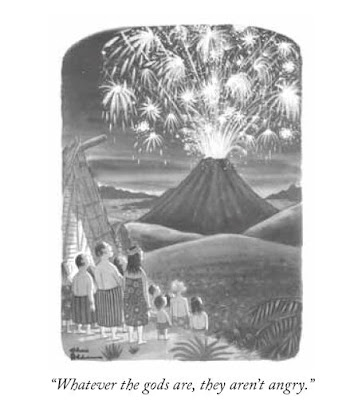 Artist: Charles Addams The New Yorker 13 June 1964
Posted by Aniruddha G. Kulkarni at 12:46 PM No comments: Links to this post