Will Pigs of Pune Pave its Paths?

"Human stink worse than other animals- While we tend to think of other animals as smelling more unpleasantly than we do, a new study suggests that the truth may actually be the opposite."

FT, July 14 2011:
"Pigs at front line in China inflation battle:
Pork prices have risen 57 per cent. Economists say a fall in the cost of the meat could be the key to bringing inflation under control
"
I see so many pigs in our neighbourhood that they keep appearing on this blog often.

Occasionally, I watch them closely. If they were cleaner, I would have probably fondled them.

Recently, I learnt that pigs are far more intelligent than dogs.

"...Some of the habits of our age will doubtless be considered barbaric by later generations-...or keeping pets; or eating animals and jailing chimpanzees;..."

And I see not just pigs, but many other species.

In October 2010, I saw an injured donkey limping around for two days, trying to graze on the weeds that grow near road dividers. Third day it was lying dead on the side. And I remembered the story of Saint Eknath (एकनाथ) giving water to a donkey in distress.

Shame on me, I haven't learnt a thing from him.

Pune's roads at the end of rather heavy monsoon 2010 are easily in much better shape than any year since 1999. But as I write early monsoon of 2011 is challenging my contention.

Very soon, I am sure, they will need help. A lot of it.

Kristen Hinman says in The Atlantic:

"How pig manure can pave our streets—and a path to cleaner energy...Enter the executives at Innoventor, a design-build firm based in St. Louis, who, with the help of almost $1 million from the Environmental Protection Agency, have created a contraption that recycles pig waste for road-paving and roofing products. The technology, which Innoventor believes has billion-dollar potential, eliminates the need for manure lagoons and could reduce reliance on fossil fuels...

...The technology passed a milestone in April, when a 300-foot stretch of test pavement went down on a busy Missouri road near a Six Flags amusement park. Lux is confident the road will hold up; he says the binder had to pass more than a dozen lab tests before transportation officials would use it. And no, he doesn’t expect drivers to raise an eyebrow. “I was out there twice on my hands and knees, putting my nose to the pavement,” he swore to me. “The road does not smell.”"

What would pig think about this? "If a Swine could Talk, we could not Understand Him!"

I see in real life arrangements similar to the picture below very often. I enjoy them. 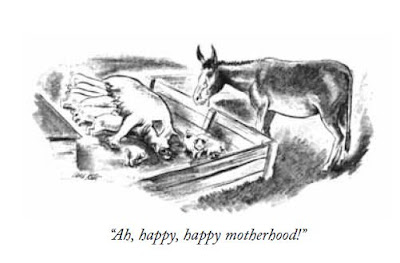 But I have yet to see a jenny suckling her baby. Does she envy sow's "happy, happy" motherhood?
Posted by Aniruddha G. Kulkarni at 9:00 AM No comments: