"When the spring arrives
And I sit outside, working,
I am never bored.
With a chisel in hand
I can raise flowers from stones."

"..."Indian films have this obsession with hygienic clean spaces, even though the country's not so clean," says Anurag Kashyap. "They're either shot in the studios or shot in London, in America, in Switzerland – clean places. Everywhere except India." By contrast, Kashyap's latest movie, Gangs Of Wasseypur, seems determined to show the India you don't see in the movies. Wasseypur is a nondescript industrial town in Bihar, India's poorest region. And rather than drugs or casinos, these gangs are fighting for control of coal mines and scrap metal. It was filmed on bustling streets and industrial wastelands, even – since one of the movie's central clans are butchers by trade – an abattoir. "That was difficult," Kashyap recalls. "The smell was so bad. While we were shooting, 60 buffaloes and a camel got slaughtered before our eyes. I don't think any of us could eat meat for a month."..."

We could talk for hours on many subjects. Once he told me how the Dalits were not allowed to construct houses in a certain direction of the Pune city because the wind blew from that direction into the city!

He spent his entire working life- from 1942 for 39 years-  in Indian (central) railways. A few years go, he wrote a book- "Tikit Please" (तिकीट प्लीज)- based on his experiences there. It was only for private circulation.

It turned out to be a wonderful book. I finished it in one sitting. A lot of the then celebrities make guest-appearances in the book. Among them are Manohar Malgaonkar (मनोहर माळगावकर),  Bal Gandharva (बालगंधर्व)...

Mr. Malgaonkar presented him with his autographed book and Balgandharva treated him with great  sensitivity and affection . The latter experience made Sarang-mama cry and reading that made me cry! Another instance of Balgandharva's greatness.

But the best thing about the book comes in its foreword by the author:

("I spent days with dignity and satisfaction working in an ordinary sounding job like ticket-checker. I still feel proud of that job.") 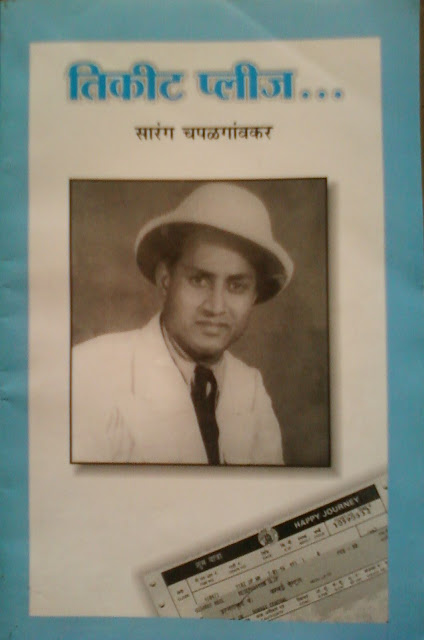 How rarely I get to read such a sentiment in a native Indian language.

Reminded me of following set of dialogues:

Kakaji: If you look carefully, you notice fun alright. At Indore station once a street-sweeper was sweeping using two long brooms. Usha, the way he was brandishing broom, your Satish would't be able to wave even a (cricket) bat.")

So many books remain unwritten in Marathi....

Has there been a great Marathi book by a nurse? By a house-maid? By an under taker at crematorium?  By autopsy (post-mortem) conductors? By a butcher? By a person engaged in manual scavenging? By an auto-rickshaw or a tonga driver? By an ST bus conductor? By a postman? By a dangerous-chemical factory worker? By MSEDCL worker exposed to high-voltage live wires? By a coal-engine train driver?.....What 'Marathi' or language do they use on the job?

And I am not talking about some howling rebel (विद्रोही) books, not the kind whose authors are now 'parallel' celebrities making monthly/quarterly appearances on TV channels anchored by 'socialist' anchors,  but written matter-of-factly, making people appreciate: Despite all the likely misery of the job, I did it with quiet dignity and satisfaction and my job was perhaps as important as that of an IT professional or a journalist or a priest or a publisher or an artist or a doctor or an architect or a teacher or a lawyer or an ad-man or an actor or a writer or a builder or a politician or a broker or a pilot or a cricketer or Miss Beauty-queen or a TV anchor...