Art historians rarely rest, and the world is generally a better place for their exertions. Scholars of the great painting traditions of India, for example, have taken knowledge of their subject to new levels in the past few decades, with their assiduous combing of documents, deciphering of inscriptions and scrutinizing of artworks.

Their immediate aim has been to name the names of Indian artists and identify their creations, pinning down as never before who did what, where and when. Their motive has been to dispel the long-held view, especially in the West, that these often small, transcendent works were made by unlauded artisans toiling away in monasteries and imperial workshops. (Putting Names to the Greats of Indian Art, Sept 29 2011)

On September 23 2007, I wrote "Perhaps Beautiful but Surely A Fraud: Thomas Daniell’s Painting of Peshwa Court."

Tambat's work is preserved alright but NOT in Malet's estate anymore.

Tambat must be first Marathi artist (painter) whose work has been clearly attributed to him. We must thank 'wily' Sir Malet- who was one of the architects of eventual demise of the Maratha empire at the hands of the British- for this.

"...Adapting the Eye explores the complex and multifaceted networks of British and Indian professional and amateur artists, patrons, and scholars in British India in the later eighteenth and early nineteenth centuries, and their drive to create and organize knowledge for both aesthetic and political purposes...

...A pivotal figure in this rich cultural interchange was the highly accomplished Indian draftsman and sculptor Gangaram Tambat, who drew on both indigenous and European artistic conventions; his remarkable hybrid drawings are juxtaposed with works by British artists, including William Hodges, William and Thomas Daniell, Robert Mabon, and James Wales."

I wish to reproduce two pictures of Mr. Navgire-Tambat courtesy Yale Center for British Art, Paul Mellon collection. These drawings on paper were commissioned by Malet and the British artist James Wales. 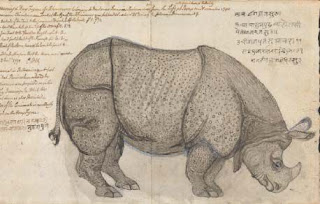 How many better drawn Rhinos have you seen? Me none.

(A Rhinoceros in the Peshwa’s Menagerie at Poona, Nov. 1790, 1790, watercolor and gouache, Yale Center for British Art, Paul Mellon Collection.) 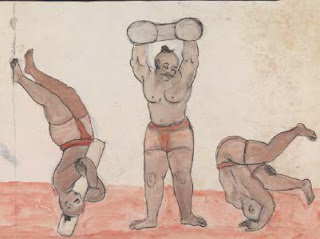 If you have been to an old-style gyms - तालीम or व्यायामशाळा in Maharashtra, I am sure you know how good this is.

There are two more drawings of Mr. Tambat in the image sheet:

1> View of Parbati, the Hill near Poona occupied by the Temples at which the Peshwa frequently Worships, 1795, watercolor and graphite with pen and brown ink on paper.

Luckily for us we can still recognise Parvati in this drawing. But for how long?

2> The Temple at Ekvera, ca. 1793, grey washes, watercolor and chalk on six joined sheets of paper.

This is a wonderful drawing, inviting me to the temple one more time, to come and observe it closely, with the help of Mr. Tambat's eyes.

This is all great but the question that bothers me is: When will Pune university hold the exhibition of Pune's own son Gangaram Chintaman Tambat?
Posted by Aniruddha G. Kulkarni at 9:00 AM 2 comments: Links to this post