Dahi Handi...Lament For an Unknown Govinda

Adrian Shubert, 'Death and Money in the Afternoon', 1999:

"The bullfight was the clearest symptom of what (José Ortega y Gasset) Ortega saw as the prime pathology of Spanish history from the eighteenth century on: “For the first time Spain sealed itself off hermetically from the rest of the world, even from its own hispanic world. I call this the tibetanization of Spain.” Ortega’s contention that the bullfight embodied Spain’s rejection of the modern world, and especially its rejection of the Enlightenment, has remained alive and influential."

"Before and beyond all else, the bullfight was a business. Its purpose, from its inception, was to make money: for private institutions and public purposes as well as for the growing myriad of individuals for whom it was a source of income, sometimes the sole source of income."


"Well, there are two kinds of people who follow the bulls, as they say in Spanish. There are those people who follow because they love the bullfighters, and there is a very small minority who are interested in the bulls, and I was always most interested in the bulls."
Marathi news TV channels showed almost nonstop coverage of Dahi Handi festival in Mumbai, Thane, Pune  on most of afternoon/evening hours of August 29th 2013.

Going against the grain, in a wonderful example of incisive reporting,  Loksatta (लोकसत्ता), a Marathi (मराठी) daily, on  August 30 2013:

("Festival of insensitivities:  Along with ears, it's like minds of common people have become numb because of fading of the festival in blaring music of DJ, glittering of politicos and inebriation that comes with sensuous singing and dancing  It's heartbreaking to see a kid slipping while playing even at home. But the top layers of Govinda-teams  that were making human pyramids were made up of five-seven year old kids. When the pyramid collapsed,  it was as if no one was concerned about those tender bodies. Dahi-handi festival was being celebrated by crushing humanity. If anyone broke his hand or leg, he was being dispatched to the hospital in an ambulance standing by. No one as if was concerned about those injured Govinda's. The festival of insensitivities could be seen in a number of places...")

This reminded me of another 'festival' of insensitivities: Bullfighting, a traditional spectacle of Spain and  a few other nations.

Is it just a  coincidence that Spanish castellers participate in Dahi Handi festivals?

Here I reproduce a small part of the interview:

"...Padilla: You don't understand the full picture. We toreros have a different view of things. The bull doesn't suffer because he's in a state of complete abandon. And that state gives rise to beauty.

SPIEGEL: You and your assistants spend about 20 minutes exhausting the bull to the point of apathy. The mounted picador mauls him with his lance, the loss of blood weakens the animal, and the muscles in his neck are so mutilated that he can hardly lift his head anymore. During the deathblow, the sword penetrates between the shoulder blades, going past the spine and into the intestines. But the blade is often deflected by a bone, and the matador has to try again. The stab wound usually doesn't kill the bull outright, which is why the assistants goad him on to move his head back and forth and to keep moving until he falls to the ground. Only then is he deliberately killed with a thrust of the sword to the neck. How is this abandon? And where's the beauty in it? 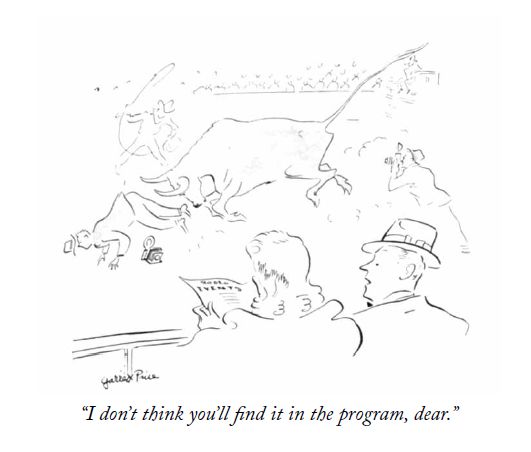 "I don't think you'll find falling of the kids to their death in the program, dear."

Below I reproduce first part of great Federico García Lorca's poem “Lament For Ignacio Sanchez Mejias”,  translated from Spanish into English (Mr. Mejías, friend of the poet was killed in a bullfight):

Posted by Aniruddha G. Kulkarni at 8:00 AM No comments: Links to this post