Where I live in Pune, there is an explosion of the population of pigs . I think there are more pigs on the roads here than either stray dogs or cows.

If you drive a two-wheeler, pigs are a bigger threat to you than a fellow scooterist.

Is there a reason behind this?

As bad as hunger is the problem of malnutrition.

“…Collating data, researchers found that India performed badly in the index primarily because of high malnutrition in children and consequent underweight children below the age of 5.

“" Beef (buffalo meat) is increasingly becoming popular as a protein source compared to pulses, some of which have become more expensive than buffalo meat…Beef consumption continues to rise as it remains the cheapest of all the meats available in the domestic market…"

I remembered cartoonist Abu Abraham’s spirited article in The Sunday Observer where he argued how beef and pork were the most affordable sources of proteins for many poor in India and hence banning them was wrong headed. That article was an eye-opener for me.

In US however, MICHAEL SHAE says:

” These are not the happiest times for beef lovers. They have to tune out doctors’ warnings about saturated fat and stories of E. coli outbreaks, not to mention worries about mad cow disease. Raising and processing cattle on an industrial scale is an environmental catastrophe (among other things, the United Nations has accused the world’s livestock industry of being responsible for more greenhouse gas emissions than the entire global transportation fleet), and if it has made cheap beef democratically available to the many, it has also made a truly tasty steak harder to come by…” 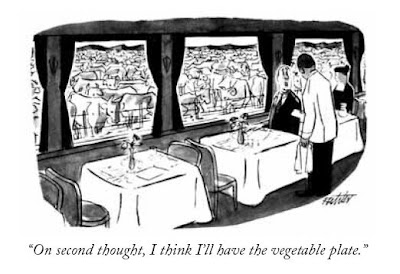 Artist: Mischa Richter The New Yorker 19 March 1955
Posted by Aniruddha G. Kulkarni at 9:00 AM No comments: Links to this post