In his book “When Genius Failed: The Rise and Fall of Long-Term Capital Management.” (2002) ROGER LOWENSTEIN said:

“…September 23, 1998…On account of a crisis a LTCM, McDongh had summoned the heads of every major Wall street bank. For the first time, the chiefs of Bankers Trust, Bear Sterns, Chase Manhattan, Goldman Sachs, J. P. Morgan, Lehman Brothers, Merrill Lynch, Morgan Stanley Dean Witter, and Salomon Smith Barney gathered under the oil portraits in the Fed’s tenth-floor boardrooms-not to bail out a Latin American nation but to consider a rescue of one of their own…

Unaccustomed to hosting such a large gathering, the Fed did not have enough leather-backed chairs to go around, so the chief executives had to squeeze into folding metal seats.”

My first thought: In year 2018, chairs won’t be a problem because most of 1998 invitees now have disappeared!

Indeed, through the lens of today’s more widespread failure, the Long-Term Capital collapse looks like a small dress rehearsal…

In ’98, though credit markets froze and stocks plunged, they recovered quickly. Long-Term Capital was wholly a financial episode; it left no scar on Main Street. The current crisis has its roots in housing, a mainstay of the economy, and with the bubble’s bursting the damage has been enduring and severe…

If individual responsibility is to be fully excised from American capitalism, the free-market enthusiasts who founded Long-Term Capital deserve no little credit…

INVESTORS have no confidence in banks or in their disclosures. How much will each downward tick in housing prices hurt the bottom line? No one knows. Failing to inspire confidence, banks cannot raise (enough) capital; thus, they do not lend…
“

I heard on BBC TV on Sept 17 that AIG worked for sanctions against India because it would not open its insurance sector to the likes of AIG!

“…But AIG takes the biscuit. Here was a huge multinational insurance group with a reputation for solid underwriting and risk management that decided to diversify from insuring risks it knew well – car crashes and fires – to covering derivatives it did not understand…

Well, $24bn of write-downs later – a mere 10 times its maximum estimate – the company has burned through its equity, spread financial chaos to all corners of the earth and humiliated the US Treasury. The job of insurance companies is to guard others against catastrophes, not cause them…”

I wonder if history will judge terrorists and these investment bankers very differently.

Therefore, I didn't find the picture below funny. Rogue nation's crisis is hitting common man and beggars of India. 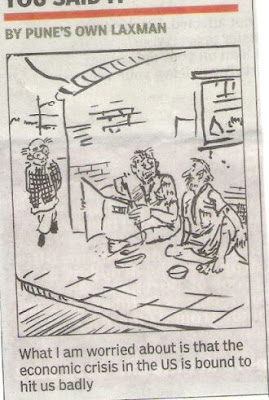