Ye Must Have Faith....The Centenary Year of Max Planck's Nobel


Albert Einstein writing to Mrs. Planck after Planck’s death :
“Now your husband has finished his days after he achieved greatness and experienced much bitterness. His gaze was fixed on the eternal things, and yet he took an active part in all that was human and he lived in the temporal sphere. How different and better the human world would be if there were more such unique people among the leaders. So it seems not to be, as the noble characters in every time and every place must remain isolated without being able to influence the events around them.
The hours that I spent in your home, and the many conversations that I conducted in private with the wonderful man will for the rest of my life belong to my beautiful memories. It cannot change the fact that a tragic event tore us apart.

In today’s loneliness, may you find comfort in that you have brought sun and harmony into the life of this revered man. From a distance, I share with you the pain of parting."

Brandon R. Brown, 'Planck: Driven by Vision, Broken by War', 2015:
"...Planck was born into an 1858 that employed candlelight and horse-drawn carriages, but he came to hear radio-transmitted symphonies and watch airplanes crisscross the sky. He joined a physics in the nineteenth century that was reportedly nearing completion. There was as yet no Planck’s constant to stand between a scientist and the pursuit of exact knowledge. The atom was unlikely, light a pure wave, and energy indivisible. Time and space stood absolute and inflexible before our rulers and clocks. Physics was a far flung outpost of science then, with a tiny clan. Germans jokingly confused it with forestry. But as Max Planck reached his last years, physicists stood like shamans for a nuclear age. Their ideas flashed and echoed around the globe..."

Max Planck:
"Anyone who has seriously engaged in scientific work of any kind realises that over the entrance to the gates of the temple of science are written the words, ‘Ye must have faith'." 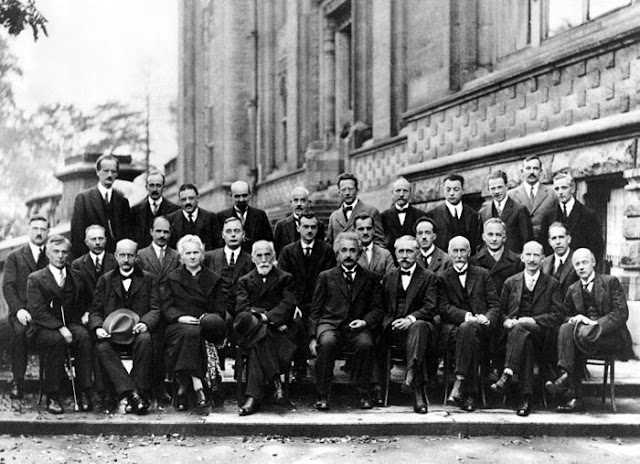 courtesy: Wikimedia
Manjit Kumar, 'Quantum: Einstein, Bohr and the Great Debate About the Nature of Reality', 2007:


"...The photograph of those gathered at the fifth Solvay conference on ‘Electrons and Photons’, held in Brussels from 24 to 29 October 1927, encapsulates the story of the most dramatic period in the history of physics. With seventeen of the 29 invited eventually earning a Nobel Prize, the conference was one of the most spectacular meetings of minds ever held. It marked the end of a golden age of physics, an era of scientific creativity unparalleled since the scientific revolution in the seventeenth century led by Galileo and Newton.

Paul Ehrenfest is standing, slightly hunched forward, in the back row, third from the left. There are nine seated in the front row. Eight men and one woman; six have Nobel Prizes in either physics or chemistry. The woman has two, one for physics awarded in 1903 and another for chemistry in 1911. Her name: Marie Curie. In the centre, the place of honour, sits another Nobel laureate, the most celebrated scientist since the age of Newton: Albert Einstein. Looking straight ahead, gripping the chair with his right hand, he seems ill at ease. Is it the winged collar and tie that are causing him discomfort, or what he has heard during the preceding week? At the end of the second row, on the right, is Niels Bohr, looking relaxed with a half-whimsical smile. It had been a good conference for him. Nevertheless, Bohr would be returning to Denmark disappointed that he had failed to convince Einstein to adopt his ‘Copenhagen interpretation’ of what quantum mechanics revealed about the nature of reality.

Instead of yielding, Einstein had spent the week attempting to show that quantum mechanics was inconsistent, that Bohr’s Copenhagen interpretation was flawed. Einstein said years later that ‘this theory reminds me a little of the system of delusions of an exceedingly intelligent paranoic, concocted of incoherent elements of thoughts’.

It was Max Planck, sitting on Marie Curie’s right, holding his hat and cigar, who discovered the quantum. In 1900 he was forced to accept that the energy of light and all other forms of electromagnetic radiation could only be emitted or absorbed by matter in bits, bundled up in various sizes. ‘quantum’ was the name Planck gave to an individual packet of energy, with ‘quanta’ being the plural. The quantum of energy was a radical break with the long-established idea that energy was emitted or absorbed continuously, like water flowing from a tap. In the everyday world of the macroscopic where the physics of Newton ruled supreme, water could drip from a tap, but energy was not exchanged in droplets of varying size. However, the atomic and subatomic level of reality was the domain of the quantum..."