"Brother-in-law, there is no rule of Bajirao II in Pune now isn't it? Good he was destroyed!...He was an evil man. When he came to Wai, I heard five hundred women committed suicide in wells...My mother-in-law used to tell me stories of Pune's women and Bajirao. That's how I know..."

* This 19th century best-selling Marathi novel is based on 'The Vicar of Wakefield' by Oliver Goldsmith, 1766

"For Nero’s life, as absolute ruler of the known world, was hell, haunted by twitching doubts and gibbering fears. He was bisexual, to begin with. That was OK in ancient Rome, but when it came to sleeping with men he received rather than gave, and that was definitely uncool. (During the act itself, the sources say, Nero would ‘imitate the cries and laments of a maiden being deflowered’.) Paranoid, he killed his mother at the request of his wife. Then, a few years later, he killed that same wife, pregnant at the time, by kicking her repeatedly in the stomach. Why? She nagged him for returning late from the races. With absolute power comes absolute permissiveness. Ordinary vices pall, and the tired hand reaches, with diminishing returns, for ever stranger fruit. Moving through the catalogue of their crimes, sexual and otherwise, one is continually astonished by the sheer inventiveness of the Caesars, their desperate originality." (review of 'The Twelve Caesars' by Matthew Dennison, Spectator, June 2 2012)

Tim BlanningHow did Napoleon do it? How did he succeed in projecting such a heroic image both to contemporaries and posterity? His wars killed well over a million Frenchmen and double that number of other Europeans and ended in total defeat, not once but twice. He condemned his adopted country to at least a century of social and economic backwardness, while his former enemies across the Channel and across the Rhine powered ahead on all fronts. In particular, his destruction of the Holy Roman Empire – arguably the most damaging own goal in European history – paved the way for German unification and the invasions of 1870, 1914 and 1940. He himself was an unprincipled opportunist, plundering both France and the rest of Europe to enrich his family and himself. Betraying the revolution that had brought him to power, he established a military dictatorship, indulging himself in a luxurious lifestyle that was a grotesque parody of the old regime. 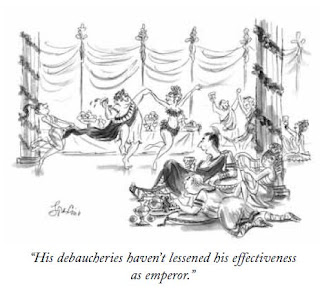 "His debaucheries haven't lessened his effectiveness as emperor."

Alas, we could say this about Baji Rao II aka Rav Baji (1775-1851), the last chief of the Maratha Confederacy- "His debaucheries haven't lessened his effectiveness as emperor."!

According to Wikipedia (and Manohar Malgonkar):

"As a Peshwa he made a deplorable overlord, a man delighted in humiliating his feudatories, seizing their estates on flimsiest of pretexts and what worse, someone imagined that their womenfolk too belonged to him".

Interestingly he has gone down in the history as one of the first high profile persons in India to get vaccinated against smallpox.

I recently read magnificent essay 'The Rise and Fall of the Age of Miracles' by Roy Porter.

Rav Baji would have been a wonderful target of Indian James Gillray if we had one.

Wikipedia informs Gillray's 'L'Assemblée Nationale' (1804) was called "the most talented caricature that has ever appeared", partly due to its "admirable likenesses". The Prince of Wales paid a large sum of money to have it suppressed and its plate destroyed.

Baji Rao too would have either paid large sum of money- larger than The Prince of Wales- to suppress his caricature or he might have dealt with the artist the way he did with Vithoji Holkar (विठोजी होळकर).

In April 1801, Baji Rao crushed Holkar with an elephant and let his corpse remain in the street near Shaniwar Wada (शनिवारवाडा) palace in Pune for 24 hours to 'enjoy' watching it from his window.

Meanwhile, safely separated by more than two centuries, I imagine Baji Rao-2, instead of the fat lady on the throne, and his cronies in the picture below. 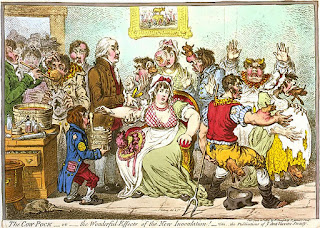 I would have liked to see another caricature of Baji Rao II.

As history informs, he was exiled to Bithoor -now part of Kanpur District near Kanpur city, in Uttar Pradesh- in year 1818.

According to the essay, he was already married six times before he was exiled at the age of forty-three. Since then he married five more times. He enjoyed the pension of Rs. 66,666+ per month for thirty-three years and two months until he died at the age of seventy-six.

The most famous political exile of 19th century was Napoleon Bonaparte. He was first exiled to Elba in 1814.

This is how a 'caricaturist' saw it: 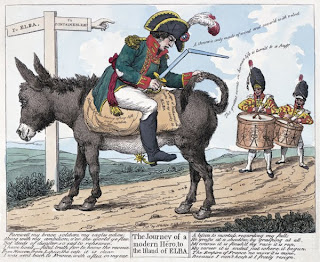 The journey of a modern hero, to the island of Elba. Print shows Napoleon I seated backwards on a donkey on the road "to Elba"; he holds a broken sword in one hand and the donkey's tail in the other while two drummers follow him playing a farewell(?) march.
courtesy: Wikipedia

P.S. Godse points out in his essay that like Napoleon, Baji Rao's "gaoler" too was a Lowe but unlike Napoleon, Baji Rao II made no effort to escape from the prison to return to his motherland. However, after reading Tim Blanning's assessment of Napoleon, at the beginning of this post, maybe Baji Rao's staying put was good for the people of Maharashtra!
Posted by Aniruddha G. Kulkarni at 9:00 AM No comments: