TV program showcased halgi (हलगी, a small drum) player Raju Awale who played at the tournament including the final. It brought back memories of ever-smiling, friendly, wiry wrestler Suresh Awale सुरेश आवळे of Miraj who died very young in a train accident.

For the first time in my life, I watched wrestling for the title of Maharashtra Kesari live on television. What fun! Although it lasted for just over 3 minutes and took place on mat, wearing non-traditional clothing.

For few years, occasionally, I have participated in red clay wrestling. Smell of the clay still fills my nostrils. I used to get beaten quite easily. If your face is in clay longer than your opponent, you get more time to smell it! This all happened at the red clay wrestling ring of Bhanu Talim भानू तालीम,Miraj.

Wrestlers were as popular as cricketers. Every time Hindkesari Maruti Mane was spotted on his motorcycle at Miraj, we stopped in our tracks and looked in awe. When we went visiting our aunt Tai-mavashi ताई-मावशी at Kolhapur, we saw gentle giants of Motibag Talim मोतीबाग तालीम. They walked past aunt's house the way elephants go to watering hole, with grace and humility, without a sound.

When at 1972 Munich Olympics Premnath (4th place Bantamweight) and Sudesh Kumar (4th place Flyweight) did well; they were as big heroes for me as Sunil Gavaskar and G R Viswanath who had helped us beat West Indies and England previous year.

On the other hand, North Indian wrestler Satpal was as unpopular as Ahmad Shah Abdali because he used to beat Marathi speaking wrestlers.

Kabaddi is another sport that has given me endless pleasure. I was better at it than wrestling! Even if we got 15 minutes of free time at school, we played Kabaddi.

I ask: When are Indians in India going to wrestle and play kabaddi? 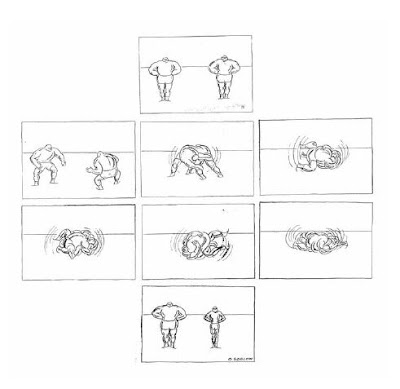 Artist: Otto Soglow The New Yorker 25 February 1928
Posted by Aniruddha G. Kulkarni at 11:55 AM No comments: