“…All the girls today are too bold. Take a look at two of their pictures and there is nothing more left to see. A girl is beautiful only if she is innocent and vulnerable. Hasn't all that innocence and vulnerability evaporated? They wear coloured contact lenses. God, if I was acting in today's films and had to kiss an actress on her eyes, I would be turned off…” (Times Of India-Mirror, August 12, 2008)

“Sex on the screen should be suspenseful, I feel. If sex is too blatant or obvious, there is no suspense. You know why I favour sophisticated blondes in my films? We’re after the drawing-room type, the real ladies, who become whores once they’re in the bedroom….” (“Hitchcock by Truffaut” 1968/1986)

Where is this complex thinking gone?

Is this because “as we come to rely on computers to mediate our understanding of the world, it is our own intelligence that flattens into artificial intelligence”? (Stanley Kubrick’s 2001: A Space Odyssey)

“Fearing censure from the Censor Board, Kangana Ranaut’s wardrobe malfunction scene in Fashion has been blurred.” (Asian Age, September 19, 2008)

“No one blinked at the Marc Jacobs fashion show last week when the model Freja Beha Erichsen appeared in a sheer black top that revealed that she was wearing a nipple ring. No one blushed at the Chris Benz show when Sasha Luss and Ekat Kiseleva posed in see-through camisoles. No one seemed particularly hot or bothered that Ali Stephens’s breasts were clearly visible through her dress when she walked for Derek Lam. No one was outraged that Francisco Costa showed a transparent raincoat at Calvin Klein with nothing but a thong underneath.

Peek-a-boo was the biggest trend at the New York Fashion Week that ended on Friday,

…But nudity, like fashion, has lost much of its power to shock.

We have become so desensitized to images of naked celebrities, sex tapes and Internet pornography that designers are hard-pressed to create anything that seems really transgressive.” (ERIC WILSON NYT September 12, 2008)

I feel we Indians are still not completely “desensitized to images of naked celebrities, sex tapes and Internet pornography.”

When we do, can we hope for some quality mainstream cinema, television and fashion?

Or are we condemned to what the late David Foster Wallace said: 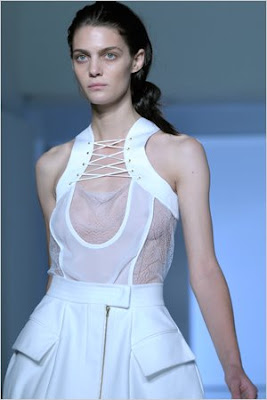 source: The New York Times
Posted by Aniruddha G. Kulkarni at 10:21 AM No comments: