"(India's) Opposition leaders have compared the hardline response to the state of emergency implemented in the 1970s under former prime minister Indira Gandhi."

"...It’s not just mullahs and mahants—(Asghar Ali) Engineer says that even the progressives have failed the country. As a young member of the club in Mumbai of the 1960s and ’70s, he would actively participate in their meetings and befriended Urdu writers like Ali Sardar Jafri, Kaifi Azmi and K A Abbas. “But I lost faith in them in June 1975—this was when, after Indira Gandhi imposed the Emergency, Jafri, Bedi, Abbas, Krishan Chander and a few others actually supported it in a letter to The Times of India,” he claims..."

36 years ago today The Emergency was declared in India.

When I remember The Emergency days, I remember the song- 'Hum Honge Kaamyaab'.

It is a Hindi version of 'WE SHALL OVERCOME'.

Abby McGanney Nolan says about 'WE SHALL OVERCOME':

"Powered by its straightforward melody and generous procession of verses, "We Shall Overcome" has covered a lot of ground. Developing out of a Southern spiritual called "I'll Be All Right" into an international anthem of perseverance, the song has proved to be a potent unifying force for people in trying circumstances..."

Sadly, I became familiar with 'Hum Honge Kaamyaab' during "The Emergency" as it played on state controlled All India Radio's Sangli station, almost every day!

For a long time I thought it was a propaganda song created by Mrs. Indira Gandhi's spin-doctors! It made me sick.

It sounded like Garuda Purana.
(The second section of this Purana deals with issues connected with death, particularly funeral rites and the metaphysics of reincarnation. Portions of the Garuda Purana are used by some Hindus as funeral liturgy. Indeed, some consider it unlucky to read this text except during funerals.)

I always thought: No wonder the cult film "Jaane Bhi Do Yaaro" shows Naseeruddin Shah and Ravi Baswani, in the end, going to the gallows to the tune of 'Hum Honge Kaamyaab'.

Even today, when I hear the song, I am reminded of one of the darkest chapters of independent India.

There the vote is being taken to deplore Benito Mussolini. It's 15:1 against him. (For some reason, in American art, these days I feel, Mussolini is made more fun of than Hitler...Perhaps to counterweight 'The Great Dictator'.)

An open vote on Mrs. Gandhi, taken among leading Marathi intellectuals, during the Emergency, would have been 15:1, in favour of her, because most of them were either silent or crawling in front of her.

The lone opposing vote would have been of the likes of Durga Bhagwat (दुर्गा भागवत) . 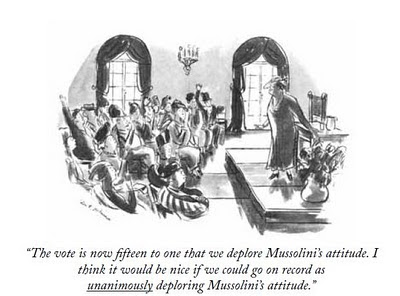 In our time, the scholar, the writer, and the artist may not be parasites dependent on aristocratic patrons, but that does not mean they are truly free. The desire for applause tends to inspire servility in anyone subject to it—and it is a short step from flattering one's public to flattering monsters who wield influence and power.