Its summary : “The Greeks understood that comedy (the gods' view of life) is superior to tragedy (the merely human). But since the middle ages, western culture has overvalued the tragic and undervalued the comic. This is why fiction today is so full of anxiety and suffering. It's time writers got back to the serious business of making us laugh”

Some excerpts: “…..Many of the finest novels—and certainly the novels I love most—are in the Greek comic tradition, rather than the tragic: Rabelais, Cervantes, Swift, Voltaire, and on through to Joseph Heller's Catch-22 and the late Kurt Vonnegut's Slaughterhouse 5. Yet western culture since the middle ages has overvalued the tragic and undervalued the comic. We think of tragedy as major, and comedy as minor. Brilliant comedies never win the best film Oscar…….
The problem is not specific to Christianity. Islam has always had a problem with comedy at its expense,…….
The resistance of the monotheisms to comedy has another, more subtle, cause. The comic point of view—the gods'-eye view—is much more uncomfortable for a believer in one all-powerful God than it was for the polytheistic Greeks. To have the gods laughing at us through our fictions is acceptable if the gods are multiple, and flawed like us, laughing in recognition and sympathy: if they are Greek gods. But to have the single omnipotent, omniscient God who made us laughing at us is a very different thing: sadistic, and almost unbearable. We do not wish to hear the sound of one God laughing…….
The various eastern philosophies give us other high vantage points. Indeed, both physics and Zen can handle laughter, and are superb tools for writing the western comic novel because they do not require absolute faith and they do not claim absolute certainty. With freedom from a death-obsessed monotheism and new tools, new places from which to view humanity, we should have entered a golden age of comedy……..
A comparison between The Simpsons and a soap opera is instructive. A soap opera is trapped inside the rules of the format; all soaps resemble each other (like psychologically plausible realist novels). What the makers of The Simpsons did was take a soap opera and put a frame around it: "this is a cartoon about a soap opera." This freed them from the need to map its event-rate on to real life: they could map its event-rate on to cartoon life. A fast event-rate is inherently comic, so the tone is, of necessity, comic. But that is not to say it isn't serious. The Simpsons is profoundly serious. And profoundly comic. Like Aristophanes, debating the war between Athens and Sparta by writing about a sex strike by the women of Athens and beyond.
With its cartoon event-rate, a classic series of The Simpsons has more ideas over a broader cultural range than any novel written the same year. The speed, the density of information, the range of reference; the quantity, quality and rich humanity of the jokes—they make almost all contemporary novels seem slow, dour, monotonous and almost empty of ideas.”

How does comedy fare with us- largely polytheistic Indians? Not well at all. In fact, our art and we seem to be getting stuffier by the day.

We never had the great “The Simpsons”. Closest we had was “Yeh Jo Hai Zindagi"” or later to some extent “Filmi Chakkar”. The last great comic film we made was “Jaane Bhi Do Yaaro (1983)” ( we did make few good-not great-comedy films since then e.g. Chachi 420(1998), Bollywood Calling (2001),Lage Raho Munna Bhai (2006)).Era of great film comedians (Johny Walker, Mehmood, Om Prakash) is clearly behind us.

The merely human view of life seems to have prevailed. We have forgotten- serious does not mean solemn.

It was not always so. 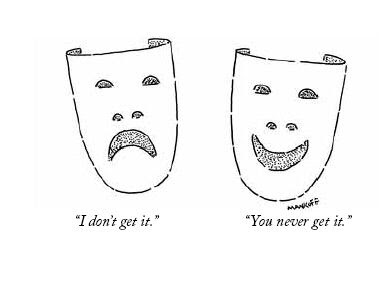