On an Eclipse Day, You can see Jayadratha's Flying Head!

On July 22nd, I went at 6:30 AM on my balcony to see what another solar eclipse meant. It was cloudy and raining. No sun alright but the sky looked weirdly dark. Birds and dogs were curiously quiet.

Slaying of Jayadratha in Mahabharata always puzzled me as a child. What did Lord Krishna do to block the sun?

We know the famous line from Bible:'And God said, "Let there be light," and there was light.'

"...Then Krishna otherwise called Hari, possessed of ascetic powers, that lord of all ascetics, having taken recourse to Yoga, created that darkness."

I admire the creativity of writers of Mahabharata.

How cleverly they embedded one of the most important celestial event in an animal's life on earth in their immortal tale!

When Arjuna decapitated Jayadratha with an arrow, the sky would have looked weird and animals quiet. What a setting for an unfolding epic tragedy.

"...During that terrible carnage resembling the slaughter of creatures at the end of the Yuga, in that deadly and fierce battle from which few could escape with life, the earth became drenched with gore and the earthy dust that had arisen disappeared in consequence of the showers of blood that fell and the swift currents of wind that blew over the field. So deep was that rain of blood that the wheels of cars sank to their naves..."

(btw- I don't get to read such graphic violence in Marathi translation of Mahabharata!)

Yesterday we had to turn to TV for a glimpse of the eclipse. I didn't like it.

Should I have gone to a place where I could watch it in the sky?

Therefore I admire the New Yorkers in Alan Dunn's picture below. They prefer the real thing to The Hayden Planetarium. 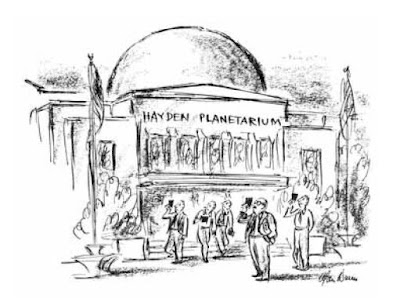 Artist: Alan Dunn, The New Yorker, July 7 1945
Posted by Aniruddha G. Kulkarni at 9:00 AM No comments: Links to this post