A Wish for Stray Dogs this Christmas

“Lost friend, lost child, lost parent, sister, brother, husband, wife, we will not so discard you! You shall hold your cherished places in our Christmas hearts, and by our Christmas fires; and in the season of immortal hope, and on the birthday of immortal mercy, we will shut out Nothing!”

...Dehumanization — representing people to be lesser, non¬human creatures, as when police officers label crimes against criminals as “N.H.I.” (“No Humans Involved”), or when Muammar el-Qaddafi calls his critics “stray dogs” — isn’t just shabby rhetoric. Dehumanization is a mind-set, as Smith writes, that “decommissions” our “moral inhibitions” about mistreating fellow human beings. Encased in law and custom, this psychological process has often licensed slavery, genocide and countless other cruelties.

(review of 'Why We Demean, Enslave, and Exterminate Others' by David Livingstone Smith, NYT, March 4 2011)

“All the animals I knew in the early years of my life were stuffed.”

I like stray dogs. Most times. Each has a distinct personality and if you care to spend some time, their lives are miserable but interesting.

Almost every morning, a stray bitch waits for me to feed her biscuits as I return home from my walk. If she isn't there, I miss something.

I still remember the late morning in 1970's when, as I got ready to go to school that opened at 12:10 PM, I was informed by friends that our favourite stray 'Vakadmani' (वाकडमानी) was dead, poisoned by municipal staff.

I went and saw her foaming at mouth, slightly bloated body. I was devastated and remained so for a number of days. I would not feel that bad again until Shreedhar Joglekar-sir's (श्रीधर जोगळेकर) death a few years later. As I filed past Joglekar Sir's body in c 1978, Vakadmani was on my mind.

I almost never feel proud of what I have done in my life but one thing I feel good about is I never threw stones at strays and chameleons when it was fashionable among kids in Miraj.

But the strays have certainly become a bit of menace for many people in Pune and elsewhere in India.

I never venture out of my house on foot in dark because of strays.

"Mumbai: Despite taking steps to curb the stray dog menace in the city, there seems to be a steady increase in the instances of dog bites...

I hope we find a way for strays and humans to coexist without biting and killing. 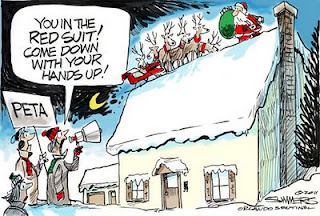 Artist: Dana Summers, December 2011
Posted by Aniruddha G. Kulkarni at 9:00 AM No comments: Links to this post