"If sex is repressed, that is, condemned to prohibition, nonexistence, and silence, then the mere fact that one is speaking about it has the appearance of a deliberate transgression. A person who holds forth in such language places himself to a certain extent outside the reach of power; he upsets established law; he somehow anticipates the coming freedom." ('The History of Sexuality', Volume I, 1976)

… in the 21st century pornography is as ubiquitous as religion once was. Its sadomasochistic stock in trade is still the same. No sexual revolution will happen until the role of penetration as a mechanism of domination is obliterated, until it makes no sense to snarl at anyone: "Get fucked", until "fucked" does not mean "ruined".
Sexual culture is so protean that we can hardly generalise about it; parents' attitudes are different from their children's and their children's attitudes may be different from one another's; kids in one school bus will be shocked and horrified at what is going on in another. Sex is simultaneously suppressed and commoditised. Its expression is both covert and blatant. Nowadays, masturbation is supposed to be good for us and yet "wanker" is a word of withering abuse. When sex is a duty, it palls; when it is absolutely forbidden, it becomes unbearably exciting. 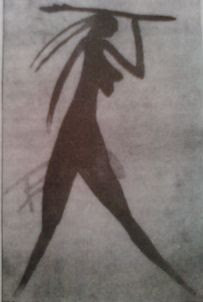 [Durga Bhagwat: When I was working among Gonds, those Gond women used to say to me that Gond women didn't wear Choli (blouse) and hence their breasts were firm. Not soft like urban women. Your Seeta arrived in Gondwana. Like us she stopped using Choli. Her breasts became firm. Our Ravana liked her. He abducted her...what big deal?...this is the story of those Gond women. It made me laugh."] 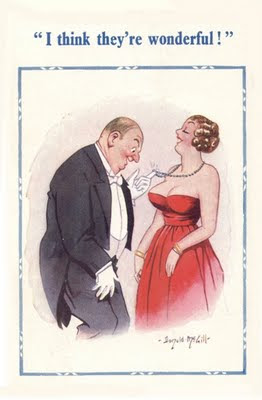 George Orwell was not sure if Donald McGill was a real person or simply a trade name but he wrote a memorable essay on him in 1941.

In short, he was a cartoonist.

Poor Mr. McGill was prosecuted in 1954 on the charge of breaking the 'Obscene Publications Act 1857' where he was found guilty and made to pay fine and costs. 21 of his cards were either banned or withdrawn from sale. There was a kind witch-hunt against him, and it was all so sad.

[By the way, such a law in India too has played havoc with artistic freedom, harassing artists like B S Mardhekar (बा. सी. मर्ढेकर).

My father's first social novel 'Dhoka! Hamrasta Pudhe Aahe' (धोका! हमरस्ता पुढे आहे)- written at the age of just 25- was dubbed 'obscene' but, unlike Mardhekar, he wasn't prosecuted. D K Bedekar (दि. के. बेडेकर) was one among few who stood by him, Jaywant Dalvi (जयवंत दळवी)was one among many who attacked him. But the incident scared off my father- he was almost broke and had a young family to support- from exploring creative, daring themes in his future work.]

"...Here one comes back to the outstanding, all-important feature of comic post cards — their obscenity. It is by this that everyone remembers them, and it is also central to their purpose, though not in a way that is immediately obvious.

A recurrent, almost dominant motif in comic post cards is the woman with the stuck-out behind. In perhaps half of them, or more than half, even when the point of the joke has nothing to do with sex, the same female figure appears, a plump ‘voluptuous’ figure with the dress clinging to it as tightly as another skin and with breasts or buttocks grossly over-emphasized according to which way it is turned. There can be no doubt that these pictures lift the lid off a very widespread repression, natural enough in a country whose women when young tend to be slim to the point of skimpiness. But at the same time the McGill post card — and this applies to all other post cards in this genre — is not intended as pornography but, a subtler thing, as a skit on pornography. The Hottentot figures of the women are caricatures of the Englishman's secret ideal, not portraits of it. When one examines McGill's post cards more closely, one notices that his brand of humour only has a meaning in relation to a fairly strict moral code...."

Orwell doesn't want these pictures to vanish because he says once their kind of humour used to be integral to the literature but because serious literature now has no place for it, we need it stand-alone.

"...Their existence, the fact that people want them, is symptomatically important. Like the music halls, they are a sort of saturnalia, a harmless rebellion against virtue. They express only one tendency in the human mind, but a tendency which is always there and will find its own outlet, like water...

...In the past the mood of the comic post card could enter into the central stream of literature, and jokes barely different from McGill's could casually be uttered between the murders in Shakespeare's tragedies. That is no longer possible, and a whole category of humour, integral to our literature till 1800 or thereabouts, has dwindled down to these ill-drawn post cards, leading a barely legal existence in cheap stationers' windows..."

Now go back to the picture of Donald McGill above.

The picture reminds me of a very popular Marathi magazine 'Awaaz'(आवाज) that has been published every Diwali since its inception in 1951.

I must have seen the magazine first time in 1970's.

I liked it only for its naughty 'Fold-In'/ 'window-pictures' (In Marathi: खिडकीचित्र) featuring women with "breasts or buttocks grossly over-emphasized". I don't think I ever read a single article or short-story from the magazine.

After reading Orwell, I wonder if Awaaz's pictures at one time "lifted the lid off a very widespread repression" in a middle-class Maharashtrian society where sex had always been repressed since Victorian era, and that the Awaaz's pictures were "not intended as pornography but, a subtler thing, as a skit on pornography", and that this "brand of humour only has a meaning in relation to a fairly strict moral code."

And hence today when- thanks to internet- pornography is widely and almost freely available, when sexual mores are changing fast and nudity is widespread, has Awaaz art lost its calling?

Also, the operative word 'at one time' in previous para is important because Awaaz does not mean or will mean anything to my 17-year-old native Marathi speaking son and most of his 'Marathi' friends.

I read that Mr. Patki used to like the art of Henry Boltinoff (1914–2001), Bill Wenzel (1918–1987)- a master of drawing a voluptuous, sexy, innocent girl-, Mario Miranda but was never influenced by them. I wonder if Patki saw McGill's pictures.

Sadly, for this post, I couldn't get hold of Patki's big colour window-picture from his heydays. But see the one below and you will get an idea of his art. 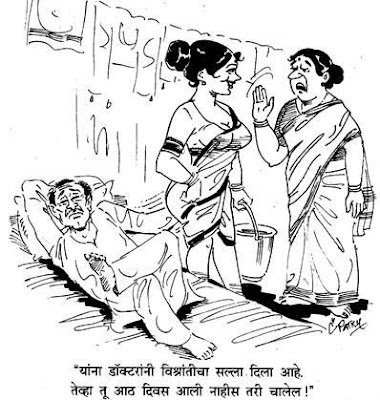 Caption- Man's wife to her female domestic: "Doctor has asked him to take rest. Therefore, you need not come for eight days!"

Now a picture of one of Patki's favourite Mr. Wenzel 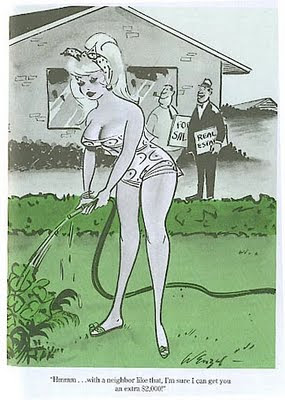 I can easily see this Wenzel's picture getting printed in Awaaz Diwali 2011 as a 'window-picture'- that is you don't see the lady below her shoulders until you turn the page- with a caption in Marathi that may run something like this:

Nice. Unfortunately with the advent of technology. This particular art is on the decline in india. While there is a lot of craze for manga or manwaha comics. Even indians, young or adult read the japanese and korean comics or stories on the internet and print but unfortunately, maybe due to lack of funds, limited audience or the narrow outlook of certain sections it continues to decline here.