Today August 6 2015 * is 225 th Anniversary of a tripartite treaty between the British, the Maratha's and the Nizam for joining forces against Tipu Sultan,  the day one may argue changed the destiny of India.

"...There are artists such as Leonardo or even Delacroix who are more analytically interesting than Goya. Rembrandt was more profoundly compassionate in his understanding. But no artist has ever achieved greater honesty than Goya: honesty in the full sense of the word meaning facing the facts and preserving one’s ideals. With the most patient craft Goya could etch the appearance of the dead and the tortured, but underneath the print he scrawled impatiently, desperately, angrily, ‘Why?’ ‘Bitter to be present’, ‘This is why you have been born’, ‘What more can be done?’ ‘This is worse’. The inestimable importance of Goya for us now is that his honesty compelled him to face and to judge the issues that still face us."

"...His portraits, in fact, which secured him a position at the Spanish court look superficially like State portraits in the vein of Vandyke or of Reynolds. But only superficially, for as soon as we scrutinize the faces of these grandees we feel that Goya seems to mock at their pretentious elegance. He looked at these men and women with a pitiless and searching eye, and revealed all their vanity and ugliness, their greed and emptiness. No Court Painter before or after has ever left such a record of his patrons..." (The Story of Art, 1950)

There already are two posts on this blog discussing the picture, reproduced immediately below, that captures the treaty above:

The key word describing the painting below is 'fraud' as against the brutal honesty of most of Goya's (1746- 1828) work! 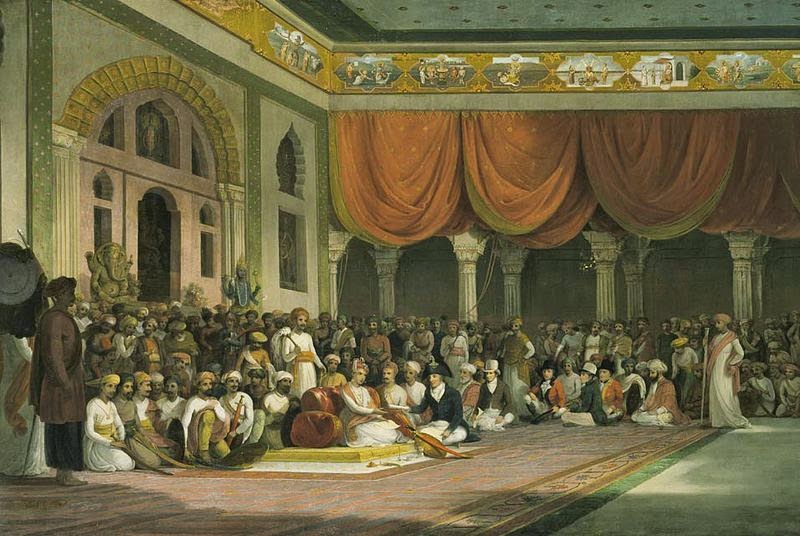 at the centre of the pictures are Sawai Madhavrao Peshwa, Nana Fadnavis to his right and in hat
Sir Charles Warre Malet Bt


The British defeated Tipu in May 1799, Maratha's in September 1803 and went on to become the rulers of India for almost 150 years. Arthur Wellesley, 1st Duke of Wellington played a major role in both the campaigns.

In February 2015, I came across the following portrait of Mr. Wellesley in The Guardian 'Art weekly' newsletter. 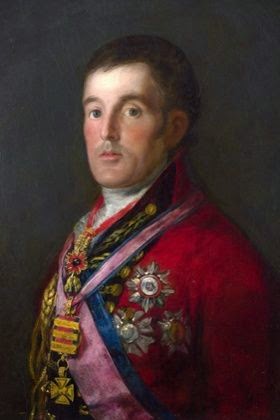 Mr. Jonathan Jones writes of the picture: "The great British general is pensive, even anxious, in Goya’s subtle portrait. Wellington made his name fighting in Spain during the Napoleonic Wars. While there, he was caught uneasily on canvas by Goya’s insightful eye"

Only a master of Goya's caliber could have captured it. I had never seen a portrait of this nature that says so much because majority of such paintings are hagiographic.

If  tripartite treaty between the British, the Maratha's and the Nizam for joining forces against Tipu Sultan had not taken place, we need not IMAGINE how the Duke would have looked, if he was fighting against the combined forces of the British enemies in India.

Goya has shown it to us above!

I wish Goya were present in Shaniwar Wada on August 6 1790*! His depiction of the ceremony showing the Peshwa, Nana and Charles Malet would have perhaps told us a different story.