The Annus Mirabilis of Marathi: Year 1608

Marathi could be the only major language where two- Ramdas and Tukaram तुकाराम- of its five greatest writers were borne in the same year: 1608.

We have already observed 400th birth anniversary of Tukaram here.

Ramdas has been widely credited to have instilled values of freedom in Marathi speaking people.

In recent years however Hindu fundamentalists have tried to claim his legacy saying that he justified war and violence, particularly against Muslims. 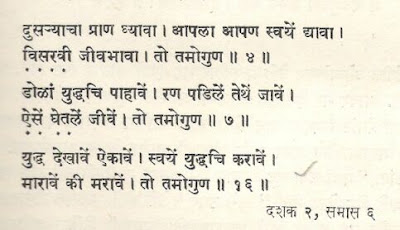 Ramdas’s fight (and also Shivaji’s) was for freedom. It so happened that most tyrant rulers of his day were Muslims. If they were Christians (British or Portuguese or Americans), he would have fought them with the same vigour.

Every time I read Ramdas, I am stunned by beauty, simplicity and brevity of his language. (Read D G Godse’s Shakti Saushthava द ग गोडसे शक्ती सौष्ठव Popular Prakashan 1972 which tries to explain some of the ‘magic’ of 17th century Maharashtra).

Sadly there has been no one who has wielded a Marathi pen the same way since Ramdas’s death.

By the way- this calendar there is not a word on either Tukaram or Ramdas in any American or British newspaper I follow.
Posted by Aniruddha G. Kulkarni at 2:00 PM No comments: