As we enter into the sesquicentennial celebration of the Civil War, Harriet Beecher Stowe's achievement reminds us that we must remember more than battles and statesmen if we are to understand the causes, the conflict and its aftermath. But swords and statesmen and armies and governments and writers and preachers all played their complex and interdependent parts in what Reynolds calls the "Battle for America." DuBois, Margaret Mitchell, D.W. Griffiths, and Henry James, not to mention Lee, Grant, and Lincoln, would likely be surprised to learn that the twenty-first century could imagine that the battle over race and power, not to mention culture and values, was really all about Harriet Beecher Stowe.

Rajmohan Gandhi on his comparative historical study, ‘A Tale of Two Revolts: India 1857 and the American Civil War', 2009:

"I was lucky too to find a live link between the two events in the person of William Howard Russell and to run into unforgettable characters like Abraham Lincoln, Marx, Tolstoy, Bankimchandra Chatterjee, Vidyasagar, Jotiba Phule, Sayyid Ahmed Khan, Allan Octavian Hume, Lakshmi of Jhansi, Hazrat Mahal of Lucknow and Harriet Beecher Stowe of Uncle Tom’s Cabin. With characters like the above, it was difficult to go wrong."

I have still not read 'Uncle Tom's Cabin' (UTC) but, like a lot of 'should-be-read' books, I have read a lot about it.

UTC was published in March 1852. Within a year, the book had sold 300,000 copies in America, and over a million in Britain. Surely it must have reached Indian shores by 1853. (Btw- distribution of this 19th century bestseller in India, its reception, its illustrations, quality of printing etc are all fascinating aspects, about which I sadly know nothing.)

Andrew Delbanco reviews a book on UTC in The New York Times June 24, 2011:

"The case for it as a literary work of depth and nuance is dubious. Yet it belongs to the very short list of American books (including, say, “The Other America” by Michael Harrington and “Silent Spring” by Rachel Carson) that helped create or consolidate a reform movement — in Stowe’s case, the most consequential reform movement in our history."

Young slave girl Eliza of the book finds freedom for herself and her boy by by fleeing to Canada. According to Rajmohan Gandhi, "Eliza's joy seems identical to the relief that Muktabai, the Mang girl, expressed half a world away at about the same time", in Maharashtra.

Why does it seem identical?

Muktabai (मुक्ताबाई) a Dalit girl of fourteen studying in one of Jotiba Phule's school wrote a forceful essay on Maharashtra's Mahars in 1855 in Marathi:

"Formerly we were buried alive in the foundations of buildings. We were not allowed to pass by the talimkhana (school). If any man was found to do so, his head was cut off playfully. We were not allowed to read and write...God has bestowed on us the rule of the British and our grievances are redressed. Nobody harasses us now. Nobody hangs us. Nobody buries us alive...We can now...put on cloth around our body..." (from Dhananjay Keer's 'Phooley').

(It's hugely uplifting that such sentiments were expressed for the first time in the Indian subcontinent (or the world?), by a Dalit girl of fourteen, so far back 156 years ago, in my mother tongue!

Take a bow, Marathi. Also read this post on glory of Marathi.

Was it a case of: What Maharashtra thinks today, India- or indeed the world- thinks tomorrow?)

Muktabai never probably read UTC because I don't know if it was then (or ever) translated in Marathi. I don't know if Mahatma Phule read it or not but most likely did. However, a few of his Brahmin fellow citizens surely did.

In one of the best essays written in Marathi, 'Kadambari' (कादंबरी), Rajwade mentions the book:

He concludes the essay, with these deeply moving words, summarising what a good novel and novelist do or should do:

(By narrating stories of animals and birds to children, it will plant the seeds of adventure and skill; convince women folk on the key to happiness in married life; convey secrets of national aspiration to the youth; guide elders to achieve contented life and by doing all this will not let any of them realise how and when it was done. This is the work of this Mayasura. Those who like Yudhishthira have received it are really great!)

Like Andrew Delbanco above, I don't think Rajwade rated UTC very highly as a novel: 'a literary work of depth and nuance'.

But it's a bit sad that he mentions the book only in relation to the American Civil War.

Didn't he see any need of an Indian UTC considering what we just read in Muktabai's essay? And more so because Rajwade showed some signs of being a Marxist Historian, anticipating D D Kosambi (दामोदर धर्मानंद कोसांबी).

Rajwade mayn't have seen any need but Kolhatkar, a fellow Brahmin of the same sub-caste, did.

(Mr. Apte has told the story of misery of women, if a similar story can be told of misery of the backward castes it is certain that it would be revolutionary next only to Uncle Tom's Cabin.)

Sadly for Kolhatkar and all of us, there would be no 'revolutionary-next-only-to-UTC' Marathi novel in his life time. There would be no literary evidence of upper caste Marathi person's capacity to enter into the subjectivity of Dalit people.

There sure was a lot of non-fiction from Jyotirao Phule and others, including upper caste Maharashtrians, but no fiction of UTC's class.

If there were to be one, who knows, social reforms in Maharashtra and India, would have been shaped differently. 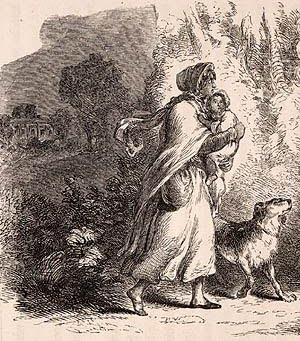 'Eliza, cradles a child in her arms'

What a beautiful picture! I liked the stylish dog as much as Eliza and her kid.

Harriet Beecher Stowe, author of UTC: "There is no arguing with pictures and everybody is impressed with them. . ."

Indeed, M'am.
Posted by Aniruddha G. Kulkarni at 9:00 AM No comments: Links to this post