“Democracy in India is only a top dressing on an Indian soil which is essentially undemocratic...

On the 26th January 1950, we are going to enter into a life of contradictions. In politics we will have equality and in social and economic life we will have inequality...

"Elections are supposed to resolve conflicts in a great democracy, but our next one will not. The elites will face off against the elites to a standoff..."

“If you spend more than [Rs ] two crore to contest an election to become an MLA, you will surely earn [Rs ] 20 crore because you have to pay back … Elections unfortunately have become the biggest area of corruption.”

"Gladiatorial shows also provided an arena for popular participation in politics. Cicero explicitly recognised this towards the end of the Republic: 'the judgement and wishes of the Roman people about public affairs can be most clearly expressed in three places: public assemblies, elections, and at plays or gladiatorial shows'."

"I've a strong impression our world is about to go under. Our political systems are deeply compromised and have no further uses. Our social behavior patterns, interior and exterior, have proved a fiasco. The tragic thing is, we neither can nor want, nor have the strength, to alter our course. It's too late for revolutions, and deep down inside ourselves we no longer even believe in their positive effects. Just around the corner an insect world is waiting - and one day it's going to roll over our ultra-individualized existence. Otherwise, I'm a respectable Social Democrat".

Today Feb 16 2012 is the election day in municipal corporations of Mumbai and nine other civic bodies.

My wife probably won't vote. She wants a button on the EVM that says "None of the above."

Here is a Marathi article by cartoonist Mangesh Tendulkar (मंगेश तेंडुलकर) why my wife might be right. 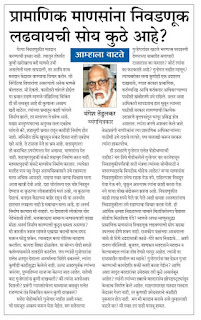 (click on the image above to view readable version)

I have already voted

Although, unlike my wife, I wish there were an option "All of the above" because, like the man in following cartoon, I sort of like them all.

They all come on TV (some of them never seem to leave!)...Not just that...

"Oh, how I wish I was like them! I haven't got any horns, more's the pity! A smooth brow looks so ugly. I need one or two horns to give my sagging face a lift. Perhaps one will grow and I needn't be ashamed any more - then I could go and join them. But it will never grow!..." (Eugene Ionesco's 'Rhinoceros')

And I like to think I'm a 'respectable social democrat'. 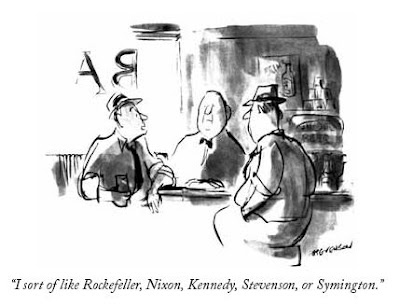 Artist: James Stevenson, The New Yorker, 21 May 1960
Posted by Aniruddha G. Kulkarni at 9:00 AM No comments: Links to this post