Something as certain as death

Benjamin Franklin is supposed to have exclaimed: "Certainty? In this world nothing is certain but death and taxes. "

But was he aware, how this dreaded term "tax" was unleashed upon humanity? Following picture tells us how.

On the subject of taxes, I read very funny story in M V Dhond's "Marhati Lavani"- Peshwa Bajirao-II (infamous for his life dedicated to debauchery) imposed a tax called "Santosh Patti" ("Pleasure Tax") on population of Pune after his accession under the presumption that people were happy to have him as their king! 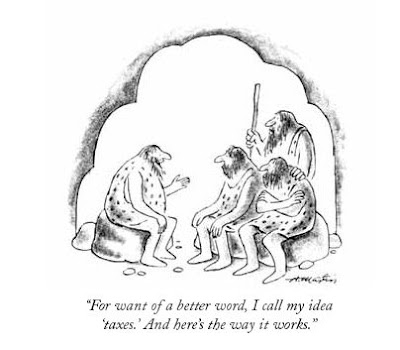 Thanks to my weak liver, I cannot afford to drink either much but I like to nurse them. They are great catalyst for conversations about life and art and test-cricket.

Barbara Holland claims in her new book "THE JOY OF DRINKING": (Drink is) "......the social glue of the human race. Probably in the beginning we could explain ourselves to our close family members with grunts, muttered syllables, gestures, slaps and punches. Then when the neighbors started dropping in to help harvest, stomp, stir and drink the bounty of the land, after we’d softened our natural suspicious hostility with a few stiff ones, we had to think up some more nuanced communication, like words. From there it was a short step to grammar, civil law, religion, history and ‘The Whiffenpoof Song.’ ".

SERGE SCHMEMANN wrote in NYT April 15 2007 "Dispatches From the Front Line of the Great Vodka War" that vodka brands are pretty meaningless because Vodka is just a diluted ethyl alcohol. He says: "The proliferation of premium vodkas, in ever fancier bottles and at ever higher prices, is understandable, given the decadence of the Western world.” 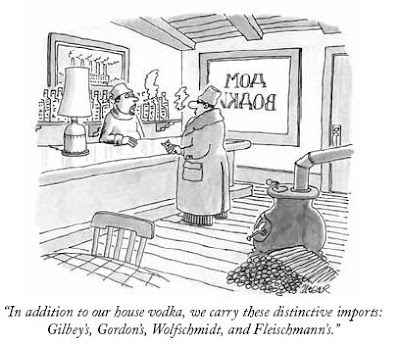 Posted by Aniruddha G. Kulkarni at 10:57 AM No comments:

Philosopher or just a lazy bum?

When I stopped working for big corporates, I thought I became a philosopher. 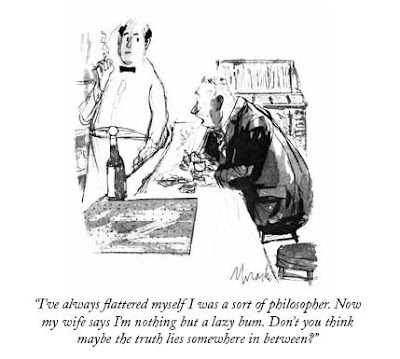