Why women button their clothes from the left, and men from the right?

Until I read review of Robert H. Frank's book "The Economic Naturalist" in July 2007, I had not even noticed that women button their clothes from the left, and men from the right! Let alone knowing the reason.

Surprise, surprise neither my wife.

By the way, I did not know this either- "bars give away peanuts and sell water because peanuts are very salty and make people thirsty." Water or booze?

"Take the positioning of buttons on clothes. Why are they on the right for men, and the left for women, especially since, for the 90 percent of the population who are right-handed, it's much easier to do up buttons from the right? It's because when buttons were introduced in the 17th century, they were affordable only by the wealthy. As rich men then dressed themselves, they did so from the right; whereas wealthy women were dressed by servants, who preferred to button them up from the left. The custom continues today, even though fewer women are dressed by servants, because there has been no incentive for the fashion industry to change it."

In Indian art-books and movies-some of the most sensual situations are when a woman asks a man to help her with wearing of a blouse, which typically has buttons on the back, or when she requests him to fasten necklace's hook on the back of her neck. 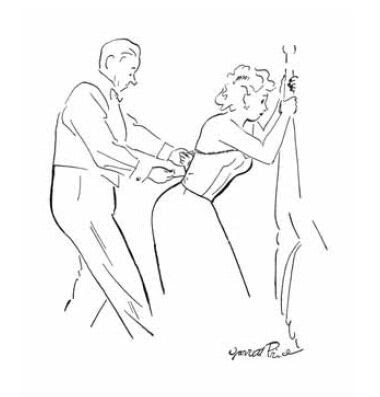