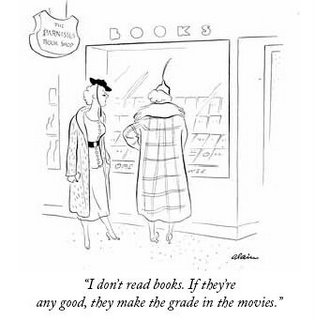 Today she may end up not watching another movie in her life because hardly any one is based on a good book.

I don’t know the last decent Hindi film based on a good book. 1983’s Ardha Satya ("Half Truth") based on Sri Da Panwalkar’s story? Yesterday, I read Vinod Khanna, mega- star of yester-years, saying as much - dearth of good scripts and scrpt-writers.

“…America seemed, at best, an absurd, vaguely comic place. When you look at the big international hits of the year, it is easy to understand why the world views America with certain disgust. Shrek may be a lovable (and Scottish) ogre, but nearly every other global hero in American movies is bellicose, intellectually limited, stuck in ancient times or locked in a sci-fi fantasy.
American films used to be an advertisement for life in the states -- there was sophistication, depth, the allure of a cool, complex manner. Now most big studio films aren't interested in America, preferring to depict an invented, imagined world, or one filled with easily recognizable plot devices.

"Our movies no longer reflect our culture," said a top studio executive who did not wish to be identified. "They have become gross, distorted exaggerations. And I think America is growing into those exaggerated images. My fear is that it's the tail wagging the dog -- we write the part, and then we play the part."
Posted by Aniruddha G. Kulkarni at 3:45 PM No comments: Links to this post