History Lies in the Eyes of the Beholder

Kate Williams writes about it in Spectator:

"We are fast forgetting how to be guilty about the past...

...And now we have Inglourious Basterds, vehemently promoted and polarising the critics. To the accompaniment of pumping rock music, (Brad) Pitt shouts the importance of ‘murder, torture, intimidation and terror’ as he encourages his Jewish-American troops to scour occupied France for ‘the German’ and leave him ‘disembowelled, dismembered, disfigured’. ‘The German has no humanity,’ he declares, in a film that has much in common with a violent computer game. War is a joke, thrilling but ultimately empty entertainment..."

Partition of India killed, by some estimates, one million people and yet it is not adequately present in the school text books of Maharashtra.

I thought I was a keen student of history in school and I didn't know much about it.

My son, who is currently studying in class X, doesn't know much about it either.

But currently, thanks to Jaswant Singh's book and his expulsion from the BJP, it rages in mainstream media.

Yesterday, I came across following passage in my son's history book:

"...Collective farming was a novel feature of Joseph Stalin's first 'Five Year Plan'. In order to ensure success of his idea, he used coercive methods and millions of peasants were forced into joining the collective farms. Great progress was achieved. Russia emerged as a powerful country. But all this was done at the cost of liberty of the people."

Now we know better than "done at the cost of liberty of the people."

"...Call those political leaders whose followers and supporters have slaughtered more than ten million of their fellow humans "members of the Ten-Million Club."

All pre-twentieth century history may (but may not) have seen two members of the Ten-Million Club: Genghis Khan, ruler of the twelfth century Mongols, launcher of bloody invasions of Central Asia and China, and founder of China's Yuan Dynasty; and Hong Xiuquan, the mid-nineteenth-century Chinese intellectual whose visions convinced him that he was Jesus Christ's younger brother and who launched the Taiping Rebellion that turned south-central China into a slaughterhouse for decades in the middle of the nineteenth century...

Hitler, Stalin, and Mao have credentials that may well make them the charter members of the Thirty Million Club as well--perhaps the Fifty Million Club..."

On page 55 of the said text book, they have a picture of Lenin. 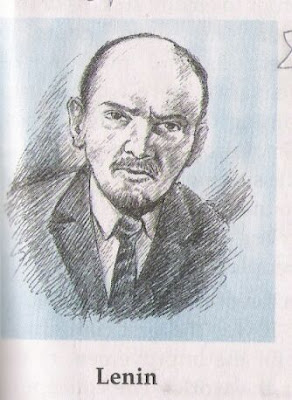 Look at the following picture.

The couple should send the photoframe to the Maharashtra State Board of Secondary and Higher Secondary Education. In the next edition of the text book, the board may use the new picture of Lenin. 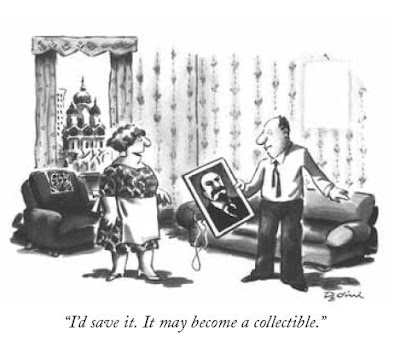 Artist: Eldon Dedini, The New Yorker, 27 November 1989
Posted by Aniruddha G. Kulkarni at 9:00 AM No comments: Links to this post