Simon Heffer, Literary Review, November 2018
“My favourite story about Armistice Day – reported by A J P Taylor in his English History 1914–45 – is inevitably contained in Guy Cuthbertson’s superbly researched and exhaustive survey of the day the Great War ended. Taylor (who, as Cuthbertson points out, was a schoolboy at the time and in bed with flu in Buxton) observed that ‘total strangers copulated in doorways and on the pavements. They were asserting the triumph of life over death.’ One of the strengths of this fine book is that the reader has the sensation that he or she actually took part in what, at the time, was regarded as the greatest day in the history of the world, though with his or her clothes on....”

Christopher Hitchens:
“...If General Pershing’s fresh and plucky troops had not reached the scene in the closing stages of the bloodbath, universal exhaustion would almost certainly have compelled an earlier armistice, on less savage terms. Without President Wilson’s intervention, the incensed and traumatized French would never have been able to impose terms of humiliation on Germany; the very terms that Hitler was to reverse, by such relentless means, a matter of two decades later....”

David Motadel, History Today, September 2014:
“....The most important of all the German missions, however, was aimed at spreading revolt from Afghanistan into the Muslim borderlands of British India – the North-west Frontier – led by the Bavarian artillery officer Oskar Ritter von Niedermayer and his rival, the diplomat Werner Otto von Hentig. Although, after an odyssey through Arabia and Iran, Niedermayer and Hentig reached Afghanistan in 1915, they failed to convince local Muslim leaders to join the jihad.Overall, German-Ottoman attempts to employ Islam for their war effort failed....”

The people of Brighton offered a warm welcome to the Indian soldiers sent to convalesce at the Sussex resort during the First World War. But the military authorities found much to be nervous about writes Suzanne Bardgett. History Today, March 2015:
“....In a letter from February 1915, a Mahratta medical subordinate wrote: The people are so very good & kind that they make no difference between black & white. Everyone seeks every opportunity of becoming fast friends with us & of serving us in any way in their power. In the evening we always go for a walk. The people treat us very well indeed. Men and women alike greet us with smiling faces and take great pleasure in talking with us.
One thing that struck the Indians was that the English they were meeting behaved altogether better than those they had met back in India. Sub-Assistant Surgeon J.N. Godbole wrote to his friend in Poona: We do not hear the words ‘damn’ and ‘bloody’ at all frequently as in India. But this only applies to those who have not seen India. Those who have gnash their teeth at us, some laugh and some make fun, but there are not many who do this. The people here are charming. It is impossible to ask why they become so bad on reaching India...."

Bob Dylan:
"...
The First World War, boys
It came and it went
The reason for fighting
I never did get
But I learned to accept it
Accept it with pride
For you don't count the dead
When God's on your side.
..." 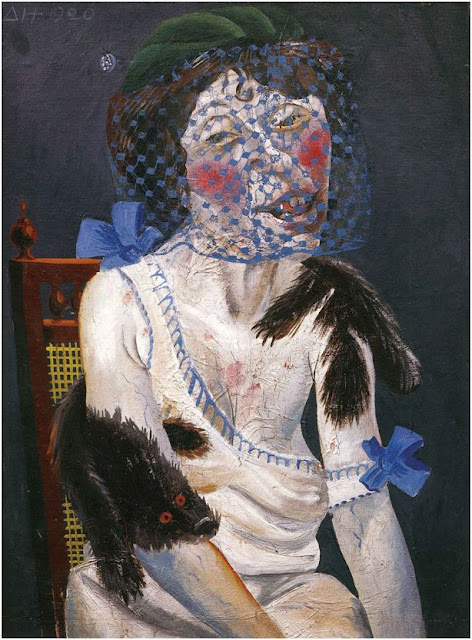 Lena Schipper writes about the painting in 1843 magazine:
"This unforgiving depiction of an ageing prostitute is typical of Dix, who sought to emphasise the ruin and moral degradation of Germany after the first world war. A soiled, ill-fitting night dress sliding off the woman’s shoulder to reveal a sagging cleavage makes her look ridiculous rather than enticing. Her face is painted in garish colours that succeed only in highlighting her bad teeth; the veil, meant possibly to lend an air of girlish flirtatiousness, merely emphasises the grotesque choice of colours. The mink, usually a symbol of wealth, high class or even royalty, is the final insult: piercing red eyes glare diabolically from its scruffy fur. Viewed next to works such as Jeanne Mammen’s “Ash Wednesday”, the painting illustrates the different ways in which male and female artists of the era looked at women."
Posted by Aniruddha G. Kulkarni at 9:00 AM No comments: Links to this post