Supreme Court of India, How about Blowing from Guns?

"Hanging by the neck till death would continue to be the mode of execution of condemned prisoners, Supreme Court (of India) said on Monday refusing to entertain a PIL seeking replacement of the ‘cruel and painful’ method with the ‘lethal injection’, a method practised in the US.

The court is right. We don't know.

But can we trust the judgment of very learned Mountstuart Elphinstone (1779–1859)?

“Elphinstone did not hesitate to order the (Brahmin) ringleaders (of a plot to murder all the Europeans in Pune) to be blown from guns, observing that this method of execution ‘contains two valuable elements of capital punishment; it is painless to the criminal and terrible to the beholder’.”

If we do, the following picture requires a small correction. Instead of tying the convict to the stump, he needs to be put in the barrel.

And does the executioner have a sense of humour like Daulatrao Shinde दौलतराव शिंदे (1779 – 1827), the king of Gwalior state?

After reading Mountstuart Elphinstone, I feel Daulatrao was a kind man. He could have chosen to crush Bakshi by elephant, the way Baji Rao II chose to deal with Vithoji Holkar विठोजी होळकर in April 1801, and let Holkar's corpse remain in the street near his palace for 24 hours so that he could enjoy watching it from window. 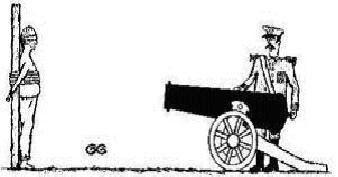