The wealthy always take what they want

Nothing about businessmen these days surprise me but it still made me shriek. Sample this:

But his myth-busting is as merciless as it is enlightening. Does Li Ka-shing, Asia’s richest man, work as hard as the myth of the toiling Chinese tycoon suggests? Yes, if you count playing golf, arriving at the office at 10am, checking the press to see if anyone has said anything nasty about you, holding a business lunch and having a massage or two as hard work…

he puts the tycoons firmly in the context of contemporary Asian politics, arguing the wealthy have merely taken advantage of the lamentable failure of the region’s politicians to regulate economies for the benefit of society as a whole.The disadvantaged are not only the labourers on low wages but also the middle classes, punished by high costs for cartel-provided goods and often cheated of their share of profits if they are foolish enough to invest as minority shareholders in godfather- controlled listed companies.”

Read that again….. the wealthy have merely taken advantage of the lamentable failure of the region’s politicians to regulate economies for the benefit of society as a whole…..

Isn’t this true of India as much as any other country in the region? Was even Mahatma Gandhi manipulated by Birlas and Bajajs and other Khadi wearing tycoons?

Based on Indivar Kamtekar’s State and Class in India, 1939-45, a harsher indictment of the Indian business class was presented by SWAMINATHAN S ANKLESARIA AIYAR in his August 2003 Times of India article “Independence & the Bengal famine”.

“…In Britain, the upper classes sacrificed much for the war effort and there was social levelling. But in India, the propertied classes benefited enormously from the war, while casual labourers suffered terribly. The Raj needed to harness the Indian upper classes for the war effort, and so pampered them while placing crushing burdens on the poor. The Bengal Famine was an outcome of this arrangement…

…. Above all, the business class flourished. The war required unprecedented quantities of every sort of manufacture. Lack of shipping constrained competition from imports. The price of cloth rose five-fold before the colonial state imposed price controls: its top priority was to encourage production, not worry about janata cloth. Business fortunes were made, and new giants like Telco and Hindustan Motors emerged in this period. Tax evasion was widespread and not seriously checked by the authorities. Indeed, some businessmen defended tax evasion as “patriotic” non-cooperation with the Raj! But the very scarcity that helped the propertied classes hit casual labourers. It also hit pensioners and others on a fixed income. The real wages of factory workers declined 30% between 1939 and 1943. By contrast, British real wages rose 49%, a levelling up. The rural landless in India were the worst hit. They had neither access to the new urban jobs or rationed urban supplies. Ranging from a quarter of the rural population in Bengal to over half in Madras, they bore the brunt of spiralling prices…

The Great Bengal Famine was a colossal human tragedy, but, cynically, no cause for political panic. Those who died could not even be counted properly, because they counted for so little. This is a harsh indictment of the class that led our independence movement. It suggests that it was no accident that Mahatma Gandhi was also a personal friend of G D Birla.” 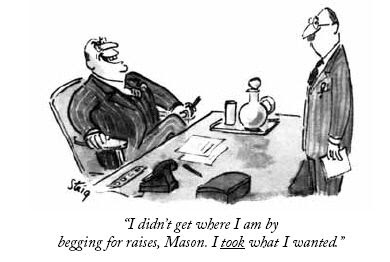 Artist: William Steig The New Yorker 2 July 1960
Posted by Aniruddha G. Kulkarni at 4:01 PM No comments: Links to this post

Was CIA behind all of India’s problems?

That is what Mrs. India Gandhi had us believe in 1970s. Elite institutions were supposed to be infiltrated by CIA agents.

For example, a few Marathi authors and newspaper editors were rumored to be on CIA’s payroll. “Thanthanpal”- the late Jaywant Dalvi once worked for USIS. I guess he was ‘confirmed’ CIA agent! Ed Fisher’s picture below was no exaggeration at all. Elephant troubles like recent ones in Kerala would have been easily blamed on CIA.

If allegiance to America is a criterion for being a CIA agent, most upper middle-class people in India have always been so because children and close relations of many of them have emigrated to US. They don’t need any extra payment for that!

India Today July 16, 2007 screams “How China Duped Nehru-
Recently declassified CIA documents present an account of China’s gameplan of intrigue and deception that led to the 1962 Sino-India war”
Looks like CIA has lost none of its influence!

Are we going to believe all that CIA tells us? Or the story is important only because it embarrasses Sonia Gandhi- granddaughter-in-law of Nehru? How will we take to another likely headline: “How India duped Pakistan- Recently declassified CIA documents present an account of India’s gameplan of intrigue and deception that led to division of Pakistan in 1971”. 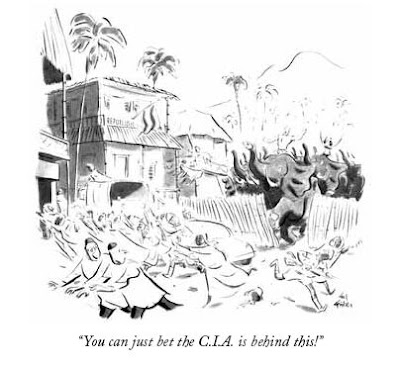 Artist: Ed Fisher The New Yorker 3 Oct 1964
Posted by Aniruddha G. Kulkarni at 1:17 PM No comments: Links to this post