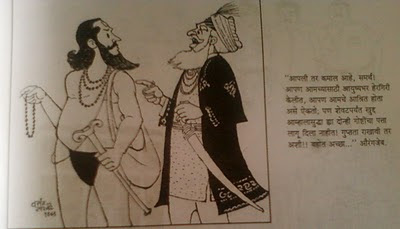 (double click on the picture to get a larger view)

Caption reads in English- Aurangzeb: "This is brilliant, Samarth! I understand, for all your life, you spied for me and were on our payroll; but until the end even I never got to know about both! Secrecy has to be maintained like this!! Bravo..."

I have extended Sarwate's caption as follows:

Aurangzeb continues:"...In fact, I have also learnt that a few years back you went into a dream of a guy called James Laine, in order to motivate him to write a book on Shiva...Alas I wish I knew how easy it was to fight Marathis off each other. No need of money or maidens. Why did I die a sad man on Deccan soil for them? Just a book or a statue would have done the job...By the way, you are lucky, Laine hasn't thanked you for the motivation."

Please note that Samarth Ramdas (1608-1681) and Aurangzeb (1618-1707) probably never met. At least, I have not read about such an event. However, there were efforts made in the last century to malign Samarth Ramdas. Vasant Sarwate is looking at such attempts comically.

Samarth Ramdas continues to be a hugely popular figure among masses of Maharashtra. He also is one of the greatest writers in Marathi.
Posted by Aniruddha G. Kulkarni at 9:20 AM 1 comment: