Stan is Dead and Gone. Sachin is NOW!

"...Jennifer had no interest in the past; she was one of the new generation that understood that gripping television was now, events happening now, a flow of images in a perpetual unending electronic present. Context by its very nature required something more than now, and her interest did not go beyond now. Nor, she thought, did anyone else's. The past was dead and gone. Who cared what you ate yesterday? What you did yesterday? What was immediate and compelling was now.

And television at its best was now..."

This image appeared in The Times of India and The Asian Age on Jan 2 2012: 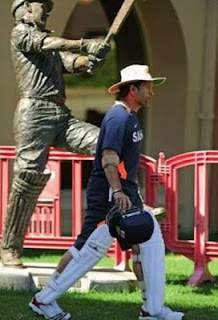 As I looked at the picture, I noticed both Sachin Tendulkar and the well-sculpted shapely figure, that is pulling a ball rather ferociously, in the background.

The Asian Age caption does tell us a little about the cricketer- Stan McCabe- whose statue it is.

But The Times of India?

"IDOLS AT PLAY: Sachin Tendulkar arrives for net practice at Sydney Cricket Ground on Sunday. The India-Australia match that begins on Tuesday will be the 100th Test at SCG, and the first between the two teams at the ground since Monkeygate."

For them Monkeygate is more important than McCabe.

I learnt about the late Mr. McCabe long time ago as a kid. "A short, stocky right-hander, he was described by Wisden as "one of Australia's greatest and most enterprising batsmen" and by his captain Don Bradman as one of the great batsmen of the game."

During the 1938 Ashes Tour of England, at first test at Trent Bridge, he scrored 232 in 235 minutes with 34 boundaries and one six, "an innings during which Bradman summoned his players not to miss a ball, as "they would never see anything like it again." Bradman later said that McCabe "held us all spellbound", and it was reported that the Australian captain trembled while watching the innings. While McCabe was at the crease, his partners contributed a total of only 58 runs, meaning that he had outscored them by a ratio of 4:1. Upon his return to the pavilion Bradman greeted him with the words: "If I could play an innings like that, I'd be a proud man, Stan". This has also been reported as Bradman saying " I wish I could bat like that". Bradman later wrote that "Towards the end [of McCabe's innings] I could scarcely watch the play. My eyes filled as I drank in the glory of his shots"..."

I worry a lot more about our media than our cricket.
Posted by Aniruddha G. Kulkarni at 9:00 AM No comments: