“HUNDREDS of contract workers engaged by local bodies and water supply and sewerage boards in major cities and towns to clean underground sewers virtually walk into death traps. A large number of them die instantaneously after inhaling noxious fumes in the sewers. Others die a slow death from respiratory and neurological ailments. Human rights organisations and trade unions have time and again criticised the inhuman practice of employing people in hazardous jobs such as these. Most people employed for the dehumanising work are Dalits…”

“Because I am wealthy and networked, breaking an Indian jail is never a problem. However, it’s Indian sewer that I dread.”
Posted by Aniruddha G. Kulkarni at 9:00 AM No comments:

I woke up on Sunday January 18, 2009 morning to read to my horror that Mastani’s (मस्तानी) samdhi/mausoleum/grave at Pabal (पाबळ) had been destroyed.

The tragic love tale of Mastani and Baji Rao-I (पहिला बाजीराव) is a great example of composite culture of India. Many have attempted to narrate it but no one has done it better than the late D G Godse (द ग गोडसे) who died seventeen years ago this month.

No doubt his Marathi book- truly a labour of love- “Mastani”, Popular Prakashan, 1989 contains a lot of speculation but it is because so little is mentioned about her in contemporary reliable sources.

In a Marathi letter to me, appended here, Godse argues that Mastani was the victim of Brahmin-Stalinism of 18th century Maharashtra.

Godse describes Mastani’s samdhi so movingly in his book. I have enclosed the relevant page from the book here.

(Aside: Godse’s labour of love moved poet Sadanand Rege (सदानंद रेगे) so much that he wrote a poem on the subject of Godse’s visit to Pabal! Find it at the bottom of this post.)

If D G Godse were to be alive today, he would have felt devastated. He might have interpreted vandalism of her samadhi as a sign of her continued persecution almost 300 years after her death. I wonder if he would have still maintained optimism expressed in his line: "Still her future is bright!" ("तरीही तिचे भविष्य उज्वल आहे!").

(click on the pictures below to get much larger view of them.) 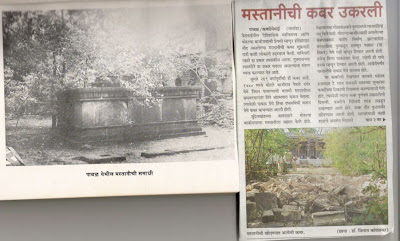 Mastani samadhi-Before vandalism and After 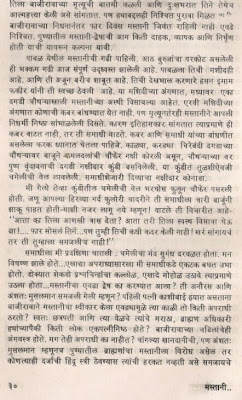 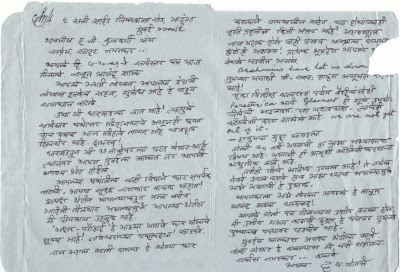 D G Godse's letter dated 1991 to me that has that immortal line "Still her future is bright!" 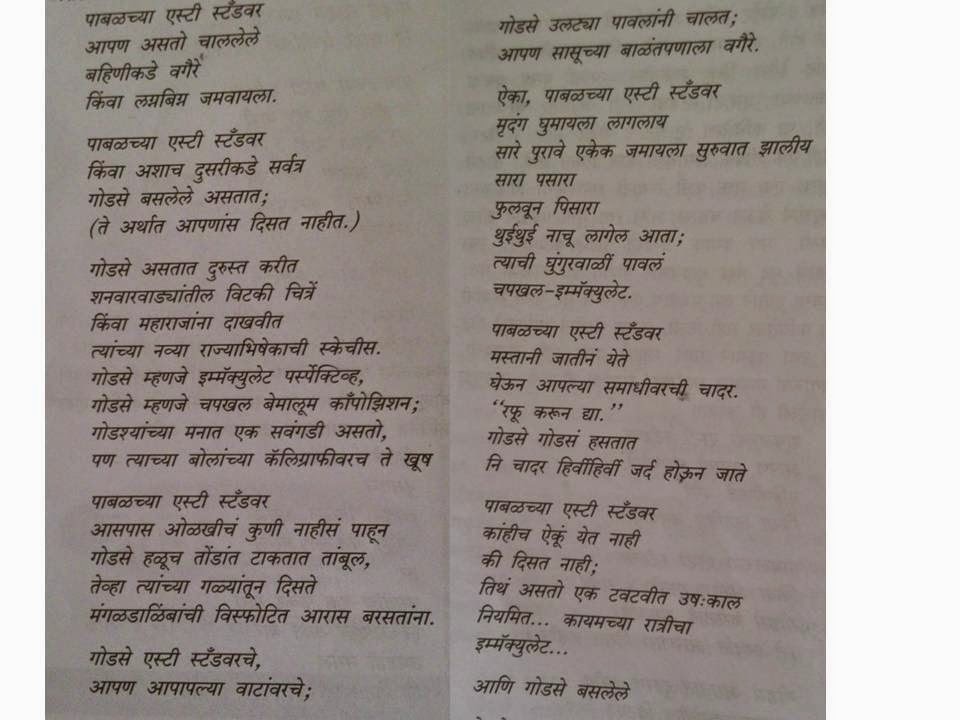 The late Sadanand Rege's poem on D G Godse's love of Mastani
Posted by Aniruddha G. Kulkarni at 9:00 AM 16 comments:

Times of India, a Patriot and Harold Pinter, a Traitor

I was moved by Michael Henderson’s obit of Harold Pinter:

“…Lord’s was in its midsummer majesty that afternoon. There was the lovely three o’clock murmur of a thousand conversations, and on the field England were making short work of a poor West Indies side. Best of all, Pinter had gathered around him four great pals who shared his love of the game: Gray, Stoppard, Harwood and Hare.

Seated behind the box’s glass partition, with a glass close to hand, and never empty, Pinter hardly missed a ball, because he was watching Brian Lara, the star batsman from Trinidad, who to his craftsman’s eyes represented something of the nobility he had admired in previous generations. One thought of the line Pinter put in the mouth of young Marcus Maudsley in the village cricket scene in The Go-Between: ‘Such elegance and command!’ Every stroke of Lara’s prompted some purr of acknowledgement, as Pinter saw in his mind’s eye all the days he had spent at that special place.

Returning to the box after spending an over or two elsewhere, I found him standing with his back to the cricket, about to address his friends. This time he was not talking about cricket. ‘Do you know,’ he asked them, ‘what I consider to be the most beautiful line in all literature?’ …

And then I read Times...

A report in The Times of India January 15, 2009 is headlined: ‘Hayden greater than Sachin.’

“ Donald Bradman - the unquestioned supreme deity of batting - said Sachin Tendulkar reminded him of himself more than anybody before or since. You might think Sachin can, thus, safely consider the No. 2 slot in a list of all-time greats his for the taking.”

Notice the impunity with which TOI is manipulating Bradman’s words.

Report continues: “But you would be wrong, or so says the ICC. Sachin isn’t even in the top 20 Test batsmen , according to new ICC "best ever" ratings.”

The report does not mention who those “top 20 Test batsmen” are. Therefore, I decided to find out more. I found it here.

It is an attempt by the ICC to rate the best-ever test-cricket patch of a player. That is why Donald Bradman’s entry reads:

If the ICC wanted to only rate players, there was no need to include the period and the opposition.

But why did I bother about this? Isn't newspaper business only "yelling about the axe murder"? 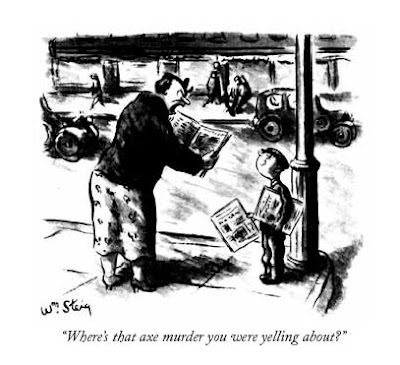 Artist: William Steig, The New Yorker, 21 October 1933
Posted by Aniruddha G. Kulkarni at 9:00 AM No comments:

What did the Three Wise Men First Discover at Satyam?

“In a swift action to salvage the beleaguered Satyam Computer Services, the Centre on Sunday set up a three-member board by nominating HDFC chairman Deepak Parekh, the former Nasscom president, Kiran Karnik, and the ex-SEBI member, C. Achutan, as independent directors to take charge of the Hyderabad-based IT major and chart out the future course of action…”
(The Hindu, January 12, 2009) 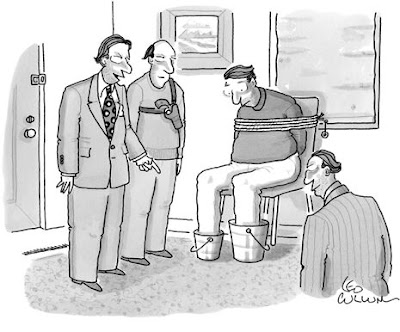 “His internationally reputed auditors have certified that what he is wearing are shoes and that they are the same size.”
Posted by Aniruddha G. Kulkarni at 9:00 AM No comments:

Pune’s winter was once reputed to bring pinkness to a fair skin.

This topsyturvy of weather has brought illnesses into my family.

‘At least the meltdown’s taken my mind off global warming.’

“At least the Satyam saga’s taken my mind off Pune's vanished winter."
Posted by Aniruddha G. Kulkarni at 9:00 AM No comments:

India’s Leaders are Not Impotent!

“His fans have done this becuase I wrote: I don’t know about pimps but how can they be impotent considering growing clout of dynasties and burgeoning nepotism in every walk of Indian life?”
Posted by Aniruddha G. Kulkarni at 9:00 AM No comments:

Graham Greene Wanted Tickets to “A Massacre in the Punjab”

Greene is my favourite author. I have really liked some of his books: The Honorary Consul, Doctor Fischer of Geneva or The Bomb Party, The Quiet American, Travels with My Aunt, The End of the Affair, The Other Man.

Greene was a complex character. Paul Theroux says:"...Greene was insecure, needy, insatiable, interested in variation and always willing to have a go...this compulsive sexuality seemed to shape the pattern of his life, his travel, his fictional subjects and his faith. Obsessive and easily bored, he was incapable of being sexually faithful to any woman. He reveled in being a wanderer, an eavesdropper, a stranger. His sexuality both depressed him and relieved his gloom. It damned him in his own faith, made him a sinner and filled him with remorse, made him say things such as ''I've been a bloody fool'' and ''I've betrayed very many people in my life'' and ''I wish I didn't have so much to be remorseful about.''..." (NYT, October 17, 2004)

“…In August 1947, a few months into an affair with Catherine Walston, the American wife of a Labor M.P., Greene planned a trip with her to India, which was then in the midst of a bloodbath set off by the British decision to divide the country along religious lines. “If we get to India,” he wrote to Walston, with whom he had recently taken a more sedate holiday in Ireland, “it will be odd — the exciting thing in exciting company. I have a feeling that even being in a massacre in the Punjab (I enclose a good account of one) won’t really be as exciting as sitting on a cliff watching for salmon.”

This assignation in the midst of mass murder didn’t come off. Richard Greene (no relation), the editor of this volume, gives no explanation. In any case, salmon-spotting was not Greene’s thing…

...“When we are young,” Fowler says in “The Quiet American,” “we are a jungle of complications. We simplify as we get older.” This was certainly true of Greene, whose letters in later life show him becoming a first-class tourist to revolutions: “Now I’m off to Nicaragua (as the guest of the Sandinista government) to light a small fire under the fool Reagan.” Though covering a vast period of personal and public turmoil, “Graham Greene: A Life in Letters” traces, quite astonishingly, no refining of sensibility and intelligence. The increasingly exotic settings merely underscore how the mind of this most famous of Englishmen abroad was fundamentally never really broadened — and may have been narrowed — by travel.
”

If they were just dogs getting slaughtered in the ring, Greene wasn’t interested!

The New Yorker
Posted by Aniruddha G. Kulkarni at 9:00 AM No comments:

“…several Hindi films have been adding a television crew and a reporter to their stock of scenes. Often the reporter is a bimbo, asks silly questions and falls for whatever is fed to her. Don’t blame the films, they are just taking popular perception and adding it to the script, as they have for years.

If content is the heart of the news business, then media owners and editors need to start worrying about what they should be doing to fix the reputation of the people generating it. It took businessmen three decades to move out of the frame as villains. God knows how long journalists will take.”

“We decided to make some changes after Mumbai attacks. New amphibious suit will enable our reporter to jostle her way in air, water or ground and shove this sword-mike into any face."
Posted by Aniruddha G. Kulkarni at 9:00 AM No comments: