"...the lazy man’s “Every unhappy family is unhappy in its own way” is “Fuck this shit.”...In The Mother Tongue, Bill Bryson argues that okay is “the quintessential Americanism” and “the most grammatically versatile of words.” Okay. But surely it has a rival—or a compatriot—in fuck. Wherever it originated (the jury is out), the F-word has flourished in our adolescent American soil. And pace Bryson, its grammatical versatility cannot be topped: You can use it as noun, verb, adverb, adjective, or interjection, not to mention in any mood whatsoever, from exultation to rage..."

The one guy who never became one- Bhau Padhye.

(Contrast this with, from another field, some one like Mr. Sunil Gavaskar, once an enfant terrible of Indian cricket, is now the establishment.)

The title of this post contains a Marathi word मवाली ('Mavali'). Mavali translates as rogue/ hooligan/ hoodlum/ ruffian. One meaning of 'rogue' is 'something or someone different from what is normal or expected'. Indeed, if anyone, Bhau was different.

Recently I came across following.

Economic and Political Weekly dated July 31 2011 has an essay by Juned Shaikh: "Translating Marx: Mavali, Dalit and the Making of Mumbai’s Working Class, 1928-1935"

'The Communist Manifesto' was translated into Marathi as 'Kamyunista Jahirnama' (कम्युनिस्ट जाहीरनामा) in Meerut jail in 1930-31 by Gangadhar Adhikari (गंगाधर अधिकारी) a scientist who had completed his PhD in chemistry from Berlin University in 1926.

The Jahirnama’s classified people in the city of Mumbai into the categories of such as kamgaar, Mavali and dalit.

"Adhikari used the term “mavali” to signify the lumpenproletariat. Mavali, a moniker for people from the hilly regions of western Maharashtra in the Bombay Presidency, signified categories of people prone to create law and order problems for the colonial police. In his explication of key words to the Marathi edition of the Manifesto that was published along with the Jahirnama, Adhikari characterised the Mavali as a class below the working class, who were “paupers” and lived in the city’s slums...Destitute and unemployed workers, paupers, and the lumpenproletariat are a step below the kamgaar varga on the social ladder...

He translated a passage from Das Capital to explain this point further:

My affection for Bhau Padhye has been expressed a few times on this blog. One such instance is here.

Agreeing with his high-profile and vocal critic Acharya Atre (आचार्य अत्रे), Bhau admits he is a rogue (मवाली).

(Acharya Atre called me a rogue in his article on 'Vasunaka' and Bhatkal promised help to file a lawsuit for libel. But I thought, Acharya Atre has really given me a very good title. I don't know why my image in real life was formed- just because I never abandoned the house- did everything else, (means alcohol, women etc!) I think - my glasses, Shoshanna's social work and socialist background- they created mixup. You believe it or not, but in college life some girls indeed concluded that I was a rogue!")

(Bhau would have surely liked my reference to Havells ad! For him life was sum total of all that happened around him. There was nothing higher or lower.) 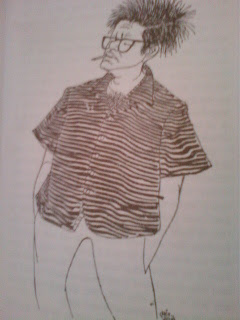 ERIN MCKEAN has said: "We like to think that human languages should be more like computer-programming languages: logical, orderly, efficient and goal-oriented. But they are more like our own DNA: complicated and full of junk information but at the same time gloriously mutable, able (for good or ill) to give rise to new living forms." (WSJ, August 10 2011)

Bhau played his part in the process of Marathi's mutation and while doing it, I think, he never sold himself to counter-revolutionary forces for money. He always remained orthogonal. And many Marathi lovers are luckier for it.
Posted by Aniruddha G. Kulkarni at 9:00 AM 3 comments: Links to this post