Stefan Zweig. Who? The One Who Missed 'The World of Yesterday'

(p.s. After this post was published, I received a call from Vasant Sarwate [वसंत सरवटे] on Feb 11 2010. He told me that he has read almost all books of Zweig. He also informed that V S Khandekar [वि स खांडेकर] has translated 'The World of Yesterday' into Marathi)

Many, if not most, important books and authors, Indian and foreign, have NOT been translated in Marathi. (Read a related post here.)

Therefore, it is not surprising that, today, most Marathi speakers don't know anything about Stefan Zweig. It wasn't always so. At one point, he was popular among adult Marathi readers

Our household was an exception where kids knew Zweig.

From our early childhood, we knew him and Erich Maria Remarque more than Henry James and Charles Dickens because my father was busy translating some of Zweig's work into Marathi.

I was captivated by my father's translations.

Durgabai explains why Zweig committed suicide in 1942: passing of a world he cherished and missed.

I too have figured out a 'Why'? More I read Antony Beevor's masterpieces on World War II, more I say why not.

I didn't know that Zweig had left a long suicide note. In the form of a book: 'The World of Yesterday'

Nicholas Lezard reviews it for The Guardian December 5, 2009.

I found it very moving.

"...His art was always self-effacing, or certainly not self-revelatory; all you could have confidently told about him from reading his work is that he was obviously thoughtful, highly observant, and humane...

...and his world, as the Habsburg empire crumbles and the serene confidence and prosperity of central Europe turns to barbarism and despair, he has produced a document which, however well you think you know the story, is essential to our understanding of history...

...His picture of prewar Paris will have you almost in tears for a lost world...

...This is, in short, a book that should be read by anyone who is even slightly interested in the creative imagination and the intellectual life, the brute force of history upon individual lives..."

I should read it.

Will I ever get to read a book on India or Maharashtra we have lost since I left Miraj in 1981? I miss Miraj the way the ladies in the beautiful picture below are missing men in the woods! 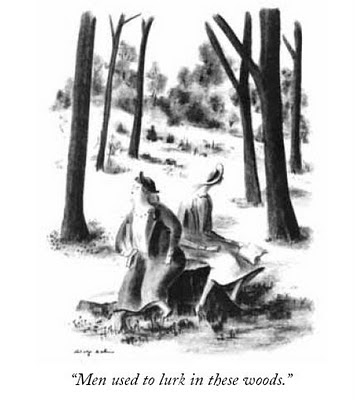 p.s. The name of the cartoonist is Adolf (meaning noble, and wolf; in sequence).

"The use of Adolf as a given name has drastically declined following the regime of Nazi Germany and its Führer, Adolf Hitler, and it has since been a widely avoided name for newborn boys due to its negative association with Hitler." (Wikipedia)
Posted by Aniruddha G. Kulkarni at 9:00 AM 1 comment: Links to this post