Do You Suppose They Know Something We Don't Know?

"...The oyster kingdom is gone, and what we have now are a few struggling refugees just trying to get a foothold in their old territory.
But what is fairly certain is that storms like Sandy are going to grow stronger and more frequent, and our shorelines will become more vulnerable. For the present storm, all we could do was stock up on canned goods and fill up our bathtubs. But for the storms to come, we’d better start planting a lot more oysters."

I have always wondered why our ancestors chose rat as a mount for Lord Ganesha. Read this for an interesting guesswork. I always thought because they were smart, tough and ubiquitous.


Business Week, in the wake of superstorm Sandy, wrote on October 30 2012:

"Unprecedented flooding throughout low-lying portions of New York City over the past two days undoubtedly left hundreds—if not thousands—of rats scrambling for their dear lives. According to experts, most of them likely survived. “They’re a jack of all trades when it comes to locomotion,” says Rick Ostfeld of the Cary Institute of Ecosystem Studies in Millbrook, N.Y. “They can’t sprint, but they run well; they’re not Michael Phelps, but they’re strong swimmers; and even though they don’t have prehensile tails, they climb well. They do it all."...No one knows exactly how many rats live in New York City, but Ostfeld suspects that there are at least as many rats as humans. .." 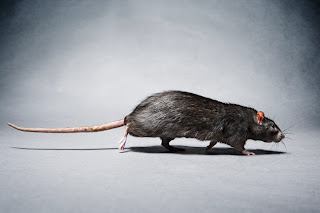 "The city’s population is dominated by the Norway rat (Rattus norvegicus), an invader from Europe, and the Black rat (Rattus rattus), which originated in Asia."

According to Wikipedia: "The black rat originated in India and Southeast Asia, and spread to the Near East and Egypt, and then throughout the Roman Empire, reaching England as early as the 1st century. Europeans subsequently spread it throughout the world."

"...Ostfeld notes that rats can easily swim a couple hundred yards. In fact, he says, “one of the ways that rats have dispersed around the world is by jumping off of ships and swimming to shore—the proverbial ‘rats leaving a sinking ship’ is actually based on reality.”..." 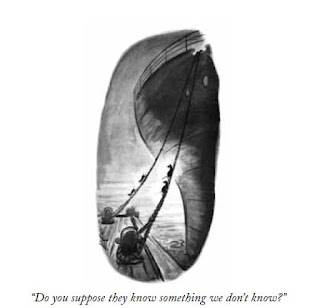 As I have said before the late Mr. Decker is one of the best cartoonists I have come across. I find his art as good as some of the great literature. You may find a few his pictures on this blog.

In the cartoon above he is guessing what incoming rats are wondering as they watch some of their brethren leaving the ship.

"Do You Suppose They Know Something We Don't Know?"
Posted by Aniruddha G. Kulkarni at 9:51 AM No comments: Links to this post