Stanley Crouch:
…heroes need huge obstacles to teach them what they must know in order to achieve the victories demanded of them.

Dominic Sandbrook:
Despite all the patriotic American nonsense about the "greatest generation", (Antony) Beevor shows that there were remarkably few heroes. There were rarely "more than a handful of men prepared to take risks and attack," he says; most men just wanted to get home in one piece and "somebody else to play the role of hero". Surveys showed that if a few broke ranks and fled, the rest would follow; in most engagements, as many as half never fired a shot.

This could be true of Panipat 1761 too but the important thing is there were "few heroes". And today is the day to remember them one more time. Let us also not forget their mounts- ponies, elephants, camels, bullocks...(read a related post here).

Remembering those who died 250 years ago today on Makar Sankranti day January 14 1761 at Panipat whose great valour was praised in lofty terms by none other than the enemy who vanquished them...

They made the supreme sacrifice NOT in the name of
a Caste,
a Religion,
a Language,
a Region...

but, maybe unwittingly, to preserve the idea of tolerant, pluralistic, multilingual, multiethnic India...

Read a related post that was written to mark the beginning of the anniversary year on January 15 2010 here.

Joseph Campbell: "A hero is someone who has given his or her life to something bigger than oneself. ” 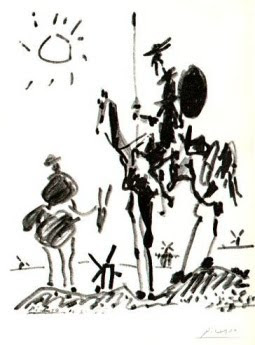 (Ignore the name of the artist for a moment and look at the picture again.

I still remember my confusion reading Mahabharat that when Yudhishthira reaches the heaven he finds Kauravas who were killed in the battle- and not his brothers who died during the journey- having good time.)
Posted by Aniruddha G. Kulkarni at 9:00 AM 4 comments: