Why should Luckier Zoozoos be Angry and Ashamed?

“A study funded by the Asian Development Bank found that, by early last year, India had 50 billionaires who together controlled wealth equivalent to 20 per cent of gross domestic product and, reportedly, 80 per cent of stock market capitalisation… Per capita income is about $1,000 (€715, £625), but many in its population of 1.1bn scrape by on much less...

…“This concentration of wealth and influence could be a hidden time bomb under India’s social fabric,” warned the report….”

If indeed it is 'hidden time bomb under India’s social fabric', it has been there for centuries!

"...At the height of Mughal splendour under Shah Jahan (reign 1628-1658), over a quarter of the gross national product of the empire was appropriated by just 655 individuals, while the bulk of the 120-odd million people of India lived on a dead level of poverty."

“…Above all, the business class flourished. The war (WWII) required unprecedented quantities of every sort of manufacture. Lack of shipping constrained competition from imports. The price of cloth rose five-fold before the colonial state imposed price controls: its top priority was to encourage production, not worry about janata cloth. Business fortunes were made, and new giants like Telco and Hindustan Motors emerged in this period. Tax evasion was widespread and not seriously checked by the authorities. Indeed, some businessmen defended tax evasion as “patriotic” non-cooperation with the Raj!…

Kamtekar says, “In a situation where franchise was based on property and education, they (the rural poor) were not on the provincial voters’ lists. Although many died on the streets of Calcutta, none actually belonged to the city. City dwellers were safe, covered by various food schemes: it was the rural poor who came to the city to die. For all their misery, they remained marginal (to the political scene). The dead were not articulate actors in the theatres of modern politics. The Great Calcutta Killing of 1946, when 5000 people were slaughtered, threatened the Bengali bhadralok, and a furore followed. But the children of the Bengali Renaissance were unharmed by the Bengal Famine...

The Great Bengal Famine was a colossal human tragedy, but, cynically, no cause for political panic. Those who died could not even be counted properly, because they counted for so little.”

This is a harsh indictment of the class that led our independence movement. It suggests that it was no accident that Mahatma Gandhi was also a personal friend of G D Birla.

According to the Direct Taxes Enquiry Committee of 1958-59, not a single Indian was convicted of tax evasion in the decade after Independence. The situation has not improved since. ”

Recently, I read about Michael Harrington’s “The Other America”:

“…Harrington argued that Americans should be angry and ashamed to live in a rich society in which so many remained poor. “The fate of the poor,” he concluded, “hangs upon the decision of the better-off. If this anger and shame are not forthcoming, someone can write a book about the other America a generation from now and it will be the same or worse.”…”

Americans should learn from Indians. Most of us have never felt ashamed.

Why don’t the poor in India rise in 'revolt' or have never 'revolted'? I have no clue.

Perhaps they are inspired by Saint Namdev संत नामदेव.

"Nama says at your home gold & money and at our home your name." 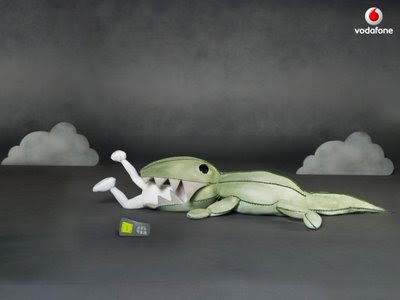 courtesy: Vodafone Zoozoo campaign
Posted by Aniruddha G. Kulkarni at 9:00 AM No comments: Links to this post