I have already expressed my love for Phantom (comics) here.

A side attraction of those comics books was one page comics of Henry. In Marathi (मराठी), it was titled as 'Gunakar' (गुणाकर). It used to be printed at the beginning or at the end of the main comics.

Until recently I couldn't figure out how Henry became 'Gunakar' in Marathi. Confusion was even more when I used to read it as 'Gunakaar'(गुणाकार) meaning multiplication in Marathi!

If indeed it were to be 'Gunakaar' (गुणाकार), the English word should have been Asterix! Because Henry is mute, there was nothing much to translate!

I agree. I read it after the main story of 'The Phantom' or 'Mandrake the Magician' or 'Flash Gordon'.

"Henry is autonomous in the SATURDAY EVENING POST strips. HENRY would not pick up a regular cast of characters, all with no proper names, only titles: the mother, the dog, the bully, the little girl, until it became a William Randolph Hurst comic strip. The SEP HENRY is similar in many ways to the LITTLE RASCAL/OUR GANG comedies of the same era. That is children free from the tyranny of an adult presence (mostly). Children navigating the world as best they can with the knowledge and experience they currently possess. Sometimes they get things right, often get things wrong, and frequently come up with solutions to problems unique to their limited experience. Necessity is the mother of invention with funny surprising results."

Henry is carrying a case of milk bottles on his head. "Sometimes they get things right". Henry has because milk after all builds strong teeth, bones and muscles.

But if he drops the case...he "often gets things wrong." 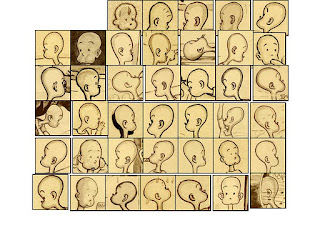 Forty Heads of Henry
Posted by Aniruddha G. Kulkarni at 9:00 AM No comments: