What will be the legacy of Dr. M Singh?

T N Ninan: So the country is in a mess, our institutions stand tarnished in the public eye, and the government faces a credibility crisis. People are right to be both disillusioned and worried about where matters are headed. The transition from unreal optimism to cynical gloom in just a few weeks is breathtaking. (Business Standard, December 18 2010)

I am afraid Dr. Singh is going to go down in history as just another ruler of India and she has had many so far.

He is no Ashoka, no Akbar, no Krishnadevaraya, no Shivaji, no Ranjit Singh, no Shahu Maharaj IV, no J L Nehru. Not even close.

His final months in the top office are being marked by rampant corruption and crony capitalism all around us.

This easily is one of the darkest periods in India's history since her partition. On par with Mahatma Gandhi's assasination, Chinese invasion, the Emergency and the Babri Masjid demolition.

It will be hard to teach our young about ethics again.

I have no sympathy for Dr. Singh. He himself is squeaky clean sounds more and more like Nero on the fiddle.

In many ways, this is much like the journey of his mentor the late P. V. Narasimha Rao. Mr. Rao- who now has become persona non grata to the Congress* and Dr. Singh has stopped being grateful to him in public- could have done a lot more to prevent the destruction of the mosque or atleast should have quit the office taking the full responsibility.

"In a rare move in politics, the Congress party has published its own history...Through it, the party for the first time officially acknowledges P V Narasimha Rao's political courage in enabling the economic reforms that gave India a new lease of life and transformed our lives..." 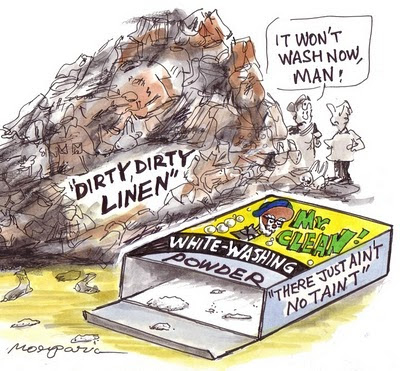 Artist: Hemant Morparia
Posted by Aniruddha G. Kulkarni at 9:00 AM No comments: Links to this post